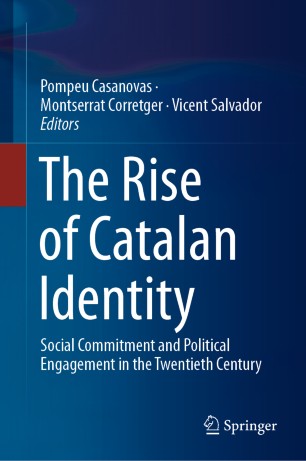 The Rise of Catalan Identity

Social Commitment and Political Engagement in the Twentieth Century

This volume helps us to understand that the current political disorders in Catalonia have deep cultural roots.  It focuses on the rise of Catalan cultural, national and linguistic identity in the 20th century. What is happening in Catalonia? What lies behind its political conflicts?

Catalan identity has been evolving for centuries, starting in early medieval ages (11th and 12lve centuries). It is not a modern phenomenon. The emergence of imperial Spain in the 16 c. and the French Ancien Régime in the 17 c. correlates with a decline of Catalan culture, which was politically absorbed by the Spanish state after the conquest of Barcelona in 1714. However, Catalan language and culture flourished again under the stimulus of the European Romantic Nationalism movement (known as the Renaixença in Catalonia).  During the first Dictatorship (Primo de Rivera, 1923-1930), the Spanish Civil War (1936-1939), and the long Francoist era (1939-1975), Catalan language and culture were repressed, yet refurbished and reconstructed at the same time.

This rise of a plural, complex, and non-homogeneous Catalan identity constitutes the subject matter of this volume. National conflicts that emerged later in the Spanish democratic state leant heavily on the life engagement and vital commitment experienced by the entrenched intellectual movements of the twentieth century in Catalonia, Valencian Country and the Balearic Islands. This book reveals the cultural and literary grassroots of these conflicts.