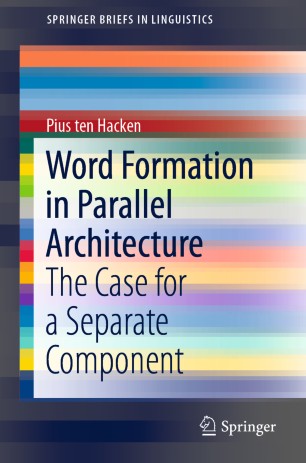 The Case for a Separate Component

This book aims to reconcile the generative considerations of Jackendoff’s Parallel Architecture (PA) with the European structuralist approach to naming. It shows that there are good reasons to single out word formation as a separate component in PA. It demonstrates that it is a drawback not to distinguish word formation, and explains that the function of word formation rules is different from the function of the lexicon and rules of grammar. After making the argument for a separate word formation component, the book sets out to determine which types of rule qualify as part of this component. Traditionally, the boundaries of word formation with inflection and with syntax have been a matter of debate. By focusing on the naming function, the book poses a guiding principle for determining which rules should be in the word formation component.

The position of morphology in the architecture of grammar has always been an issue of debate in generative linguistics. Since Chomsky (1970), this question has been framed in terms of the Lexicalist Hypothesis. Compared to Chomsky’s architectures, Jackendoff’s Parallel Architecture places phonetic and conceptual structures at the same level as syntactic structure, i.e. connected by bidirectional linking rules rather than interpretation rules. One of the consequences is that PA does not formally distinguish lexicon entries from rules of grammar. This changes the setting for the question of the autonomy of morphology, because the Lexicalist Hypothesis depends on this distinction.