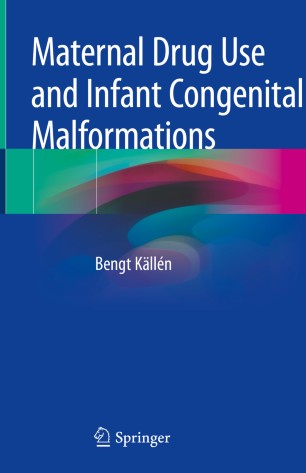 This book is the combination of the literature on maternal drug use and birth defects with a set of new data on most types of drugs.
In this book, for each group of drugs the relevant scientific literature on drug teratogenicity is presented, with consideration of possible sources of error and also what the findings may mean from a practical point of view. The book also adds data from the Swedish health registers for 1996-2013 based on more than 1.7 million early-pregnancy midwife interviews.
Maternal Drug Use and Infant Congenital Malformations will find an engaged audience among people working within the field, and will be of interest to healthcare providers, especially obstetricians and other clinicians who treat women of childbearing age.

Bengt Källén, MD, PhD, is professor emeritus of the Tornblad Institute at Lund University in Lund, Sweden. Dr. Källén has been professor in embryology since 1965, was head of the Tornblad Institute from 1965-2017, and served as a consultant at the National Board of Health and Welfare in Stockholm from 1964-2015. He has published about 400 scientific articles, many of which concern drug use during pregnancy, and a number of books.

“This book is suitable for practicing obstetrics/gynecology generalists and family practitioners who provide care to women desiring to become pregnant and those who are pregnant. It serves as a good general resource for these practitioners.” (Shivani Patel, Doody’s Book Reviews, April 17, 2020)