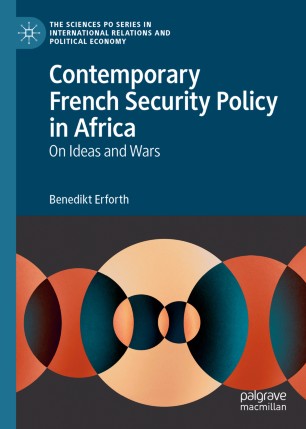 On Ideas and Wars

“Erforth makes a notable contribution to our understanding of foreign policy decision-making. He convincingly demonstrates that French interventions in Mali and the Central African Republic were the result of competition among actors with different mental maps and belief systems.”

“Erforth spins a fascinating tale of François Hollande’s interventions in Mali and CAR. He shows how simultaneous attention to both process and ideation can aid theoretical development in Foreign Policy Analysis.”

“The book makes an important and innovative contribution not only to the policy-making processes that led to these two operations, but more broadly to our understanding of recent developments in French African policy.”

Despite efforts to normalize its post-colonial relationship and the downsizing of its permanent military presence, France remains a sought-after security provider in Africa. This book uncovers individual and collective motivations that drive French foreign and security policy in Africa. It explains French interventionism by drawing on actors’ subjective perceptions of reality and seeks to answer why French decision-makers are ready to accept the considerable risks and costs involved in guaranteeing the security of African countries. Adopting an actor-centric constructivist ontology, the author traces the emergence and subsequent development of ideas throughout the decision-making processes that led to Operation Serval in Mali and Operation Sangaris in the Central African Republic.

Benedikt Erforth holds a PhD in International Studies from the University of Trento and has taught international relations and EU politics at Sciences Po Paris, France.