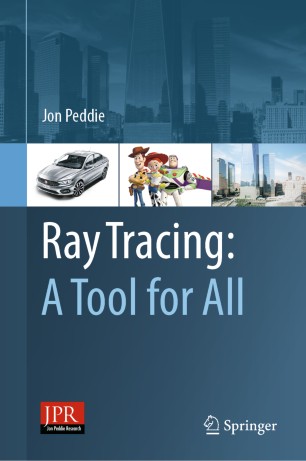 Ray Tracing: A Tool for All

This is the first book to offer a comprehensive overview for anyone wanting to understand the benefits and opportunities of ray tracing, as well as some of the challenges, without having to learn how to program or be an optics scientist.

It demystifies ray tracing and brings forward the need and benefit of using ray tracing throughout the development of a film, product, or building - from pitch to prototype to marketing.

Often considered an esoteric subject the author takes ray tracing out of the confines of the programmer’s lair and shows how all levels of users from concept to construction and sales can benefit without being forced to be a practitioner.

It treats both theoretical and practical aspects of the subject as well as giving insights into all the major ray tracing programs and how many of them came about.

It will enrich the readers’ understanding of what a difference an accurate high-fidelity image can make to the viewer - our eyes are incredibly sensitive to flaws and distortions and we quickly disregard things that look phony or unreal. Such dismissal by a potential user or customer can spell disaster for a supplier, producer, or developer. If it looks real it will sell, even if it is a fantasy animation.

Ray tracing is now within reach of every producer and marketeer, and at prices one can afford, and with production times that meet the demands of today’s fast world.

Jon Peddie is a pioneer of the graphics industry and lectures around the world on topics pertaining to graphics technology, augmented reality and the emerging trends in digital media technology. Recently named one of the most influential analysts who regularly advises investors in the GLG network, he is frequently quoted in trade and business publications, was the former president of Siggraph Pioneers, and he is also the author of several books including The History of Visual Magic in Computers and Augmented Reality. Jon Peddie was recently honored by the CAD Society with a lifetime achievement award.