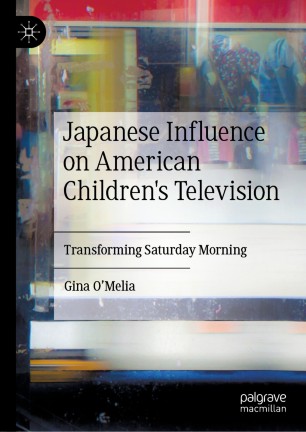 Japanese Influence on American Children’s Television examines the gradual, yet dramatic, transformation of Saturday morning children’s programming from being rooted in American traditions and popular culture to reflecting Japanese popular culture.  In this modern era of globalization and global media/cultural convergence, the book brings to light an often overlooked phenomenon of the gradual integration of narrative and character conventions borrowed from Japanese storytelling into American children’s media.  The book begins with a brief history of Saturday morning in the United States from its earliest years, and the interaction between American and Japanese popular media during this time period.  It then moves onto reviewing the dramatic shift that occurred within the Saturday morning block through both an overview of the transitional decades as well as an in-depth analysis of the transformative ascent of the shows Mighty Morphin Power Rangers, Pokémon, and Yu-Gi-Oh!.
Gina O’Melia received a PhD in Global Affairs from Rutgers University, USA and is currently an adjunct professor at the Division of Social Sciences at Hudson County Community College, USA.  Her research currently involves cultural transition and convergence, especially between the United States and Japan.