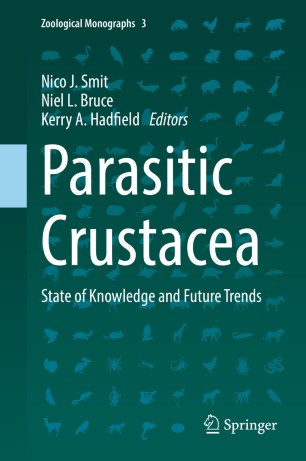 State of Knowledge and Future Trends

This book offers the first comprehensive review of parasitic Crustacea, which are among the most successful and diverse parasites. Starting with an introductory chapter, followed by an historic overview and topic-specific chapters, each presenting a different aspect of parasitic crustacean biology, it enables readers to gain a better understanding of how these parasites function and allows direct comparisons between the different parasitic crustacean groups. The authors also discuss, in depth, the adaptations and interactions that have made parasitic Crustacea as successful as they are today, covering topics ranging from the history of their discovery, their biodiversity, phylogeny, evolution and life strategies to their role as vectors, or hosts of other organisms, and their significance in ecological processes. Consisting of ten chapters from leading international experts in the field, this volume offers a one-stop resource for all researchers, lecturers, students and practitioners.

Prof Nico Smit is a Professor in Ecology and Director of Research of the Unit for Environmental Sciences and Management at North-West University, Potchefstroom Campus, South Africa. Nico’s research focuses on the biodiversity, taxonomy and ecology of parasitic Crustacea and blood protozoa of marine and freshwater fishes and he has authored and co-authored more than 135 scientific papers and two edited books on these and other related topics. To date 15 PhD and 28 MSc students have graduated under his supervision. Nico has contributed to the management of national and international academic societies as president of the Parasitological Society of Southern Africa (PARSA), president of the South African Society of Aquatic Scientists (SASAqS) and committee member of the International Symposium on Fish Parasites (ISFP). Recently he has been the first South African aquatic parasitologist to be rated by the South African National Research Foundation (NRF) as an internationally acclaimed scientist.

Dr Kerry Hadfield is a Senior Lecturer in Zoology at North-West University, Potchefstroom Campus, South Africa and a committee member of the Parasitological Society of Southern Africa (PARSA). Dr Hadfield received her doctoral degree from the University of Johannesburg where she revised several genera and species of cymothoid isopods from South Africa. Her focus has been predominantly on marine parasitic isopods of the families Cymothoidae and Gnathiidae but is now expanding to include most parasitic crustaceans. She is also one of the taxonomic editors for the World Register of Marine Species (WoRMS) and the World List of Marine Freshwater and Terrestrial Isopod Crustaceans. Kerry has published more than 20 papers describing one new genus of Isopoda and 15 new species (mostly from Africa).

Prof Niel Bruce is an extraordinary Professor in Zoology at North-West University, Potchefstroom Campus, South Africa and a Research Associate of the Queensland Museum in Brisbane, Australia. He is a world expert on the taxonomy of marine isopod crustaceans, including the parasitic families. Niel has written more than 186 scientific papers, numerous reports, popular articles, five monographs and three edited books. He has worked at the Smithsonian Institution, Australian Museum, Zoological Museum in Copenhagen as Curator of Crustacea, National Institute of Water and Atmospheric Research in New Zealand as head of the Marine Invertebrate Biodiversity and Collections programs. Most recently Niel was Senior Curator at the Museum of Tropical Queensland. Niel's research continues to focus on the taxonomy, systematics, biogeography and biodiversity of tropical marine isopods, both free living and parasitic forms. He has described or redescribed more than 500 species, 50 new genera and four new families of marine isopod. The other primary research focus, through graduate students, has been revisions of fish parasitic isopods of Southern Africa and Australia and Cirolanidae of Indonesia.