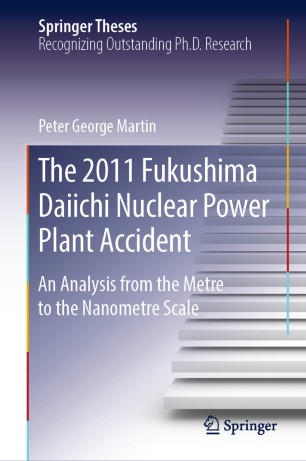 An Analysis from the Metre to the Nanometre Scale

This PhD sought to determine the mechanisms for the reactor explosions by mapping, collecting and analysing samples from across the area of Japan that received radioactive fallout from the explosions. In doing this, the author conducted significant fieldwork in the restricted-access fallout zone using ground and novel UAV-based mapping of radiation to identify hot-spot areas for sample collecting but also using these tools to verify the efficacy of the clean-up operations ongoing in the prefecture. Such fieldwork was both technically pioneering for its use of UAVs (drones) but also selfless in terms of bravely entering a nuclear danger area to collect samples for the greater benefit of the scientific community.

Peter first completed his BSc (Hons) in Earth Sciences at the University of Bristol, before undertaking his philanthropically-funded PhD within the Interface Analysis Centre, also at Bristol. He is currently a Research Associate in the School of Physics and an academic within the South West Nuclear Hub. His current research investigates the origins and environmental behaviour of microscopic particles of radioactive material within the environment.  Peter has published over 30 peer-reviewed journal articles and has presented his work at leading scientific conferences around the world.