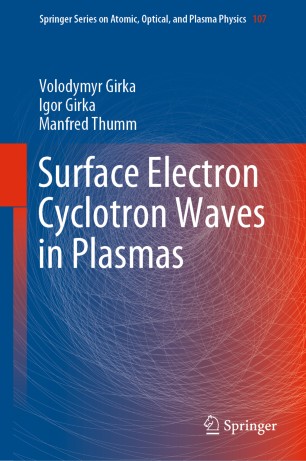 This book is the first of its kind devoted to surface waves propagating across an external static magnetic field at harmonics of the electron cyclotron frequency. Based on comprehensive theoretical studies carried out over the course of about forty years, it presents unique material on various characteristics of these transverse waves, namely, dispersion properties and their dependence on numerous design peculiarities of plasma waveguides; damping due to interaction with the plasma surface (the kinetic channel) and collisions between plasma particles (the Ohmic channel); interaction with flows of charged particles moving above the plasma surface; parametric excitation due to the effect of an external radiofrequency field; and their power transfer for sustaining gas discharges. Clarifying numerous complicated mathematical issues it is a valuable resource for postgraduate students and experts in plasma physics, electromagnetic waves, and the kinetic theory of plasmas.

Volodymyr O. Girka was born in Kharkiv, Ukraine in 1957 and completed his M.S., Candidate of Science, and Doctor of Science degrees in plasma physics at V.N.Karazin Kharkiv National University (KKhNU), Kharkiv, in 1980, 1985, and 2001, respectively. From 2002 to 2015, he was a Professor at the Department of General and Applied Physics, KKhNU. He authored 3 textbooks, 3 monographs, and more than 80 papers. His research interests included the propagation, excitation, and absorption of surface-type electromagnetic waves (in particular, surface cyclotron waves and azimuthal flute modes) in devices for plasma electronics and plasma technologies. Prof. Girka was awarded the prize “High School of Kharkiv: the best names” by Kharkiv’s Regional Governor and was nominated as “the recognized professor of fundamental subjects” in 2008. He passed away on November 3, 2015.

Igor O. Girka was born in Kharkiv, Ukraine in 1962 and completed his M.S. degree in theoretical nuclear physics, and Candidate of Science and Doctor of Science degrees in plasma physics at V.N.Karazin Kharkiv National University (KKhNU), Kharkiv, in 1985, 1991, and 2004, respectively. From 2003 to 2005 he served as a Vice-President at KKhNU, and has been Dean of the KKhNU School of Physics and Technology since 2005. He has authored 5 textbooks, 3 monographs, and more than 90 papers. His current research interests include the propagation, conversion, and absorption of magneto hydrodynamic and surface-type electromagnetic waves in fusion devices and devices for plasma electronics. Prof. Girka was awarded the K.D. Synelnykov prize by the National Academy of Sciences of Ukraine (NASU) in 2010. Since 2015, he has been Vice-President of the Ukrainian Physical Society, and in 2018 he was elected a corresponding member of the NASU.

Manfred Thumm was born in Magdeburg, Germany, in 1943 and completed his Dipl. Phys. and Dr. rer. nat. degrees in physics at the University of Tübingen, Germany, in 1972 and 1976, respectively. From 1976 to 1990 he worked at the Institute for Plasma Research, University of Stuttgart, Germany. In June 1990 he became a Professor at University of Karlsruhe and Head of the Gyrotron and Microwave Technology Division at Institute for Technical Physics, Research Center Karlsruhe (later KIT). From 1999 to 2011, he served as Director of the Institute for Pulsed Power and Microwave Technology, KIT. Prof. Thumm has authored/co-authored 6 books, 21 book chapters, more than 400 journal papers, and more than 1500 articles in conference proceedings. He holds 14 patents for active and passive microwave devices, and has received 7 international awards since 2000. In 2002, he became an IEEE Fellow and was awarded the title of Honorary Doctor, presented by St. Petersburg State Technical University. His research interests include high-power microwave engineering and plasma heating.