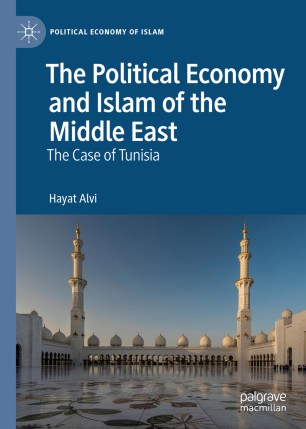 The Political Economy and Islam of the Middle East

The Case of Tunisia

Part of the Political Economy of Islam book series (PEoI)

This book analyzes the political economy of the MENA region with a focus on pre-revolutionary political and economic conditions, the 2011 revolution itself, and post-revolutionary political processes in Tunisia. The author places particular emphasis on the political role of women, Islam, and democracy after the revolution, and argues that post-Revolution Tunisia serves as an ideal model for the MENA region to follow. This volume will interest scholars, students, researchers, and everyone who is interested in the politics of MENA and political economy.
Hayat Alvi is Associate Professor at the US Naval War College, USA.

Hayat Alvi is Associate Professor at the US Naval War College, USA.

“After pioneering the Arab Spring in Dec. 2010, Tunisia continues in a turbulent region as an exceptional case of relative successful transition. Hayat Alvi adds to the few English studies of this ex-French colony as her interdisciplinary analysis sagaciously links the historical sociology of 14th century Ibn Khaldun to the political economy of 20th century Amartya Sen. As the book title indicates, findings from her documentary analysis and interviews, especially about gender, inform us of transition challenges far beyond this Tunisian case. Beautifully written.” (Bahgat Korany , Professor of International Relations and Political Economy, American University in Cairo, Egypt, and lead author of UNDP 10th Anniversary Arab Human Development series Arab Human Development in the 21st Century)

“The book is a very interesting and comprehensive examination of the, so far, only meaningful attempt in the Arab world to transition to democracy. Alvi carefully and concisely explains how the Tunisian transition offers insight into the mechanisms for democratic transition. While still in the very early stages, the Tunisian case is critically important to wider discussions of the Arab world particularly in political economy, the role of women, and the particular dynamics of secularism vs Islamism. The Tunisian case is a must read.” (Joseph W. Roberts, Associate Professor of Politics and International Relations, Roger Williams University, USA)

“Dr. Hayat Alvi has crafted a rigorous, detailed, and nuanced analysis of two entities in the same volume–the Middle East and North Africa in general, and more specifically Tunisia. In her analysis she further clarifies and contextualizes concepts such as auto-imperialism, and Islamism while also elaborating on the political economy of Tunisia in the context of secularism, Islamism, human rights, and gender perspectives, among other themes. The volume is rich in thought-provoking ideas, and at the same time a coherent and multidimensional synergy of themes that define the uniqueness of Tunisia within the sub-region of the Middle East and North Africa (MENA).  Though the book is specific to Tunisia, scholars, practitioners, and students of political Islam, developments in the Middle East and North Africa, would benefit from the contending issues and perspectives expounded in it.” (Earl Conteh-Morgan, Professor of International Studies, University of South Florida, USA)

“Scholars, students, and observers of the Arab region will find this book invaluable in cutting through the ongoing cacophony of events, and calmly identifying the separate strands of political, economic, religious and other dynamics that make the Tunisian experience so important for the entire region. Hayat Alvi's discussions of political economy, the role of women, the problems of corrupted governance, and the power of consensus-building among Islamists and secularists are especially important in capturing the enduring lessons of Tunisia's democratic transition.” (Rami G. Khouri, Adjunct Professor of Journalism, Journalist-in-Residence, and Senior Public Policy Fellow, American University of Beirut, Lebanon, and Director of Anthony Shadid Archives research project)

“After pioneering the Arab Spring in Dec. 2010, Tunisia continues in a turbulent region as an exceptional case of relative successful transition. Hayat Alvi adds to the few English studies of this ex-French colony as her interdisciplinary analysis sagaciously links the historical sociology of 14th century Ibn Khaldun to the political economy of 20th century Amartya Sen. As the book title indicates, findings from her documentary analysis and interviews, especially about gender, inform us of transition challenges far beyond this Tunisian case. Beautifully written.” (Bahgat Korany , Professor of International Relations and Political Economy, American University in Cairo, Egypt, and author of UNDP 10th Anniversary Arab Human Development series Arab Human Development in the 21st Century)

“Hayat Alvi analyzes the Tunisian Revolution within the broader context of less successful movements elsewhere in the Arab world since 2011, suggesting Tunisia as a model for emulation.  Based on my own experience of twelve years in Tunisia, including annual visits since the Tunisian Revolution, I find Professor Alvi’s analysis clear and persuasive.  Her book shows a deep understanding of both the country and the area and a firm command of the literature and social science theory.  It will appeal to a broad audience of both specialists and generalists.” (Laurence O. Michalak, Former Vice-Chair, Center for Middle Eastern Studies, University of California, Berkeley, USA)

“Following the revolutions of the 2011 Arab Spring, the Middle East and North Africa (MENA) region has experienced some of the most profound divisions in its history. With this excellent book, Alvi offers a fresh look at a complex interplay between political Islam and political economy of the region, with a special emphasis on Tunisia. Timely and relevant, this book does a superb job in explaining the intricate legacies of Tunisia’s Jasmine Revolution.” (Lasha Tchantouridzé, Professor, Norwich University, USA)

“Professor Alvi’s fascinating analysis of modern Tunisia offers intriguing insights into the only state to achieve a delicate balance of democracy and Islamic values in the Post-Arab Spring world. With exceptionally clear analysis, Alvi guides the reader through a comprehensive synthesis of Tunisia’s on-going political, economic, and human rights concerns. The result is a most valuable addition to our understanding of the impact of repression, reformation, and post-revolutionary societal change in the Arab world.” (Frank C. Pandolfe, Vice Admiral, U.S. Navy (ret.))

“Dr. Alvi makes a seminal contribution to understanding a region which is still undergoing profound change. Where the cards will eventually fall, no one knows. But this critical work certainly helps us make sense of the journey.” (Azeem Ibrahim, Research Professor, Strategic Studies Institute, US Army War College, USA)


“The Arab uprisings that spread across much of the Arab world in 2011 started in a place that was seemingly unlikely to inspire Arab revolution: Tunisia. Since then, Tunisia has been touted as a relative success story, even as recent developments have raised some doubts about its trajectory. Strikingly, Tunisia’s transition has been largely non-violent. What explains this? In this thoughtful, well-informed book, Hayat Alvi expertly credits the inclusive nature of the dialogue across civil society and the political system. She grounds the conversation in analysis of Tunisia’s political economy, and powerfully addresses the challenges of the gender issue across the secular-religious divide. Highly recommended.” (Shibley Telhami, Anwar Sadat professor for Peace and Development, University of Maryland, and Non-Resident Senior Fellow at the Brookings Institution, USA)

“After initiating the Arab Awakening in 2011, Tunisia has courageously sustained forward progress in a way that neighboring countries in the MENA region have not.  How? Dr. Alvi’s book brings us into the center of Tunisia’s political economy, and the at times difficult balance between secularists and Islamists, as they jointly attempt, through civic dialogue, to forge a path out of Tunisia’s recent history of corruption and abuse of power. The complexity of contemporary Tunisia requires a multidisciplinary and multi-leveled approach, which Alvi deftly provides, helping us more fully understand this precarious moment of hope.” (Daniel Cowdin, Professor, Religious Studies, Salve Regina University, USA)

“With passion and sound academic logic, Professor Hayat Alvi argues that the social transformation in the relatively smaller but diverse Tunisia can be an ideal role model for the wider Arab world primarily because of Tunisian resilience on the age-old but long-forgotten social-bonding or Asabiyya. Inclusiveness advocated by the Tunisian Islamists would continue to inspire the broader region as did the Jasmine Revolution which unleashed the Arab awakening.” (P.R. Kumaraswamy, Professor, Centre for West Asian Studies (CWAS), Jawaharlal Nehru University, and Honorary Director, Middle East Institute, New Delhi, India)

“Tunisia's relative success in transitioning away from strongman rule to a more democratic framework makes it stand out in the Arab world.  Alvi's political economy approach to explaining these important developments marks an important advance that transcends the emphasis in press accounts on personalities and stereotypes.” (Juan Cole, Richard P. Mitchell Collegiate Professor of History, University of Michigan, USA)