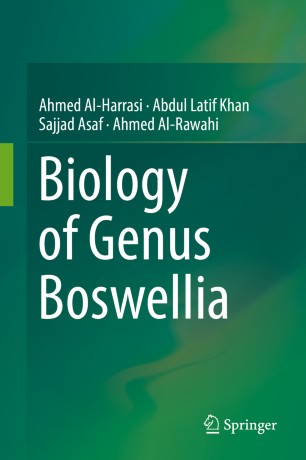 This book provides insight into the biology and genomics of the genus Boswellia (family Burseraceae), a natural resource used for the production of frankincense, an oleo-gum resin. The Boswellia species are ecologically, medicinally, commercially and culturally important. Significantly contributing to the paucity of comprehensive literature on this genus, this volume provides a detailed discussion on the genomics, physiology and ecology of Boswellia. The chapters cover a wide range of topics, including taxonomy, distribution, genetic diversity and microbiology. The production process of frankincense and its impact on the species are presented as well. In light of the recent decline of various Boswellia populations, species propagation and conservation are discussed. Plant scholars, ecologists and conservation biologists will find this book to be an important and informative reference.

Prof. Ahmed Al-Harrasi received his BSc in Chemistry from Sultan Qaboos University (Oman) in 1997 his MSc in Chemistry from the Free University of Berlin in 2002 and his PhD in Organic Chemistry in 2005 as a DAAD-fellow under the supervision of Prof. Hans-Ulrich Reissig. His PhD work was on New Transformations of Enantiopure 1,2-oxazines. He received the Fulbright Award in 2008 for postdoctoral research in chemistry, for which he joined Prof. Tadhg Begely group at Cornell University where he worked on synthesis of isotopically-labeled thiamin pyrophosphate. After a postdoctoral research stay at Cornell University in 2009, he started his independent research at the University of Nizwa, Oman, where he founded the chair of Oman’s Medicinal Plants and Marine Natural Products, merging chemistry and biology research.  He is currently a Professor of Organic Chemistry and the Vice Chancellor for Graduate Studies, Research and External Relations at the University of Nizwa. He is the founder and chairperson of the Chair of Oman’s Medicinal Plants and Marine Natural Products. The budget of his interdisciplinary-funded projects exceeds seven millions USD. He was a chair and invited speaker in many international conferences. He is a referee for more than 15 international chemistry and biotechnology Journals. He has authored and co-authored over 300 scientific papers, one book and 6 book chapters. He taught many chemistry courses both at MSc and BSc levels.
Dr. Khan received his B.Sc. and M.Sc. degree in distinction from University of Peshawar, Pakistan. Later, he joined the Department of Chemistry, Kohat University of Science & Technology, Kohat, Pakistan to complete his M.Phil. in Phytochemistry and JASSO Research Fellowship by the Gene Research Center University of Tsukuba, Japan. Dr. Khan was selected for an honorary scholarship by Kyungpook National University, South Korea for his PhD degree in Plant Physiology. After his PhD, he remained as a Post-Doctorate Fellow at the School of Applied Biosciences. He worked as Research Professor at the Institute of Agriculture Science & Technology, Kyungpook National University, South Korea. He has published more than 150 research articles as a principal and co-author in journals of international repute. His research activities focus on plant molecular physiology during environmental and microbial antagonists and plant genome sequencing. His current projects include draft and chloroplast genomes of date palm, Boswellia sacra, pomegranate and various endemic medicinal plants of Oman. He is currently working as Associate Professor at Natural and Medical Sciences Research Center, University of Nizwa, Nizwa Oman.
Dr. Sajjad Asaf completed his Master in Botany (MPhil) from Kohat University of Science and Technology (KUST) Kohat, Pakistan in 2012. He received the KNU Honour Scholarship for PhD studies in South Korea and completed his Ph.D. (2017) at the Laboratory of Crop Physiology at Kyungpook National University, South Korea. His Ph.D. research work was on the physiology and genomics of plant growth promoting endophytic bacteria and its role in environmental stress tolerance. He is committed to genome sequencing and analysis of plant organelle and their comparison with nuclear genomes and has been fortunate to obtain a wide range of experience in the field of chloroplast, mitochondria and microbial genomics. He pursued postdoctoral research for one year in plant physiology and genomics at Kyungpook National University, South Korea. Currently, he is an Assistant Research Professor at University of Nizwa, Oman.
Professor Ahmed Al Rawhi earned his M.Sc. and Ph.D. in Plant Pathology from the University of California at Berkeley in 1992 and 1995 respectively. Earlier (1988), he had completed with Honors his B.Sc. in Biological Science at North Carolina State University (Raleigh, USA).  Upon his return to Oman, he became a lecturer at Sultan Qaboos University, where he taught courses in the fields of Plant Pathology and Microbiology. He also conducted research in soil-borne pathogens, biocontrol, and disease management programs and published articles in high impact international journals. From December 1997 until May 2001, he had the honor of serving as Minister of Agriculture and Fisheries, and played a major role in developing various strategies and development plans for these vital sectors of the Omani economy. He served as member of the State Council from 2001 to 2011 and led important studies and reports for the government of Oman. He was also Chairman of the Academic Foundation Committee for the University of Nizwa Project from 2000 to 2004, the year he was appointed as Chancellor of the newly founded University. Throughout his tenure as Chancellor, he embarked on bringing the project to reality and creating a functioning academic institution that adheres to institutionalization, quality standards, ethics, and procedures. Under his dynamic leadership, thousands of Omani students graduated with Bachelor’s and higher degrees, and the University contributed strongly to community services and produced innovative research relevant to the needs of Oman. He was promoted to the academic position of Founding Professor by a scholarly independent Academic Committee in December 2006. Professor Ahmed Al Rawahi is a member of various national academic committees including the Education Council, and Research Council. He was also a member of the American Pathological Society. In November 2000, he was greatly honored to receive from HM Sultan Qaboos bin Said the Oman Medal of Merits (2nd degree, civil). In December 2013, the University of Wisconsin Oshkosh awarded him the Honorary Doctorate Degree in recognition of his role as “a distinguished and visionary academic leader with an international voice and perspective”.