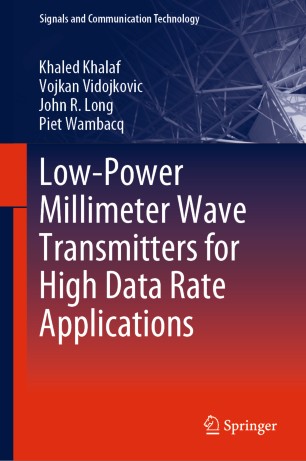 Khaled Khalaf obtained his Ph.D. in Electrical Engineering from Vrije Universiteit Brussel, Belgium in 2016. He works as a researcher at IMEC, Leuven, Belgium with interest on CMOS mm-wave circuits and systems for wireless applications with more emphasis on low-power transmitters for high datarate communication.

Vojkan Vidojkovic received his PhD degree from the Eindhoven University of Technology in the Netherlands in 2007. He works as a technical staff member at Intel in Germany.

John R. Long has a Ph.D. degree in Electronics from Carleton University in Ottawa. He worked in industry for 12 years in the Advanced Technology Laboratory at Bell-Northern Research in Ottawa, and in January 2015 he was appointed Professor in Electrical and Computer Engineering at the University of Waterloo in Canada. His current research interests include low-power and broadband circuits for highly-integrated wireless transceivers, energy-efficient wireless sensors, mm-wave IC design, and electronics design for high-speed data communications.

Piet Wambacq has a Ph.D. degree from the Katholieke Universiteit Leuven, Leuven, Belgium. He is a Principal Scientist at IMEC, Heverlee, Belgium, working on RF CMOS design for wireless applications. Since 2000 he is a Professor with the University of Brussels, Brussels, Belgium.