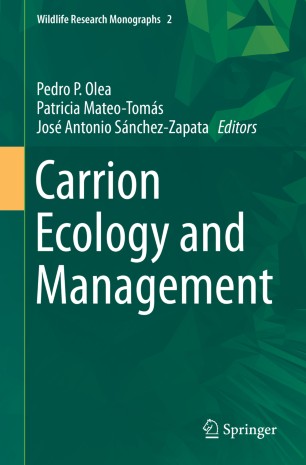 Carrion, or dead animal matter, is an inherent component of aquatic and terrestrial ecosystems worldwide, and is exploited by a wide diversity of organisms from different trophic levels, including microbes, arthropods and vertebrates. Further, carrion consumption by scavengers, i.e. scavenging, supports key ecosystem functions and services such as recycling nutrients and energy, disposing of carcasses and regulating disease spread. Yet, unlike dead plant matter, dead animal decomposition has received little attention in the fields of ecology, wildlife conservation and environmental management, and as a result the management of carrion for maintaining biodiversity and functional ecosystems has been limited.

This book addresses the main ecological patterns and processes relating to the generation and consumption of carrion both in terrestrial and aquatic ecosystems. It also discusses a number of conservation concerns and associated management issues, particularly regarding the increasing role of human-mediated carrion in ecosystems. Lastly, the book outlines future research lines in carrion ecology and management, and identifies the major challenges for scavengers and scavenging processes in the Anthropocene.

Pedro P. Olea is a Professor and researcher at the Centro de Investigación en Biodiversidad y Cambio Global (CIBC-UAM), Departamento de Ecología, Facultad de Ciencias, Universidad Autónoma de Madrid, Spain. His research focuses on understanding how global human activities, such as hunting, and livestock and crop farming, affect patterns and processes in species, communities and ecosystems at different spatial scales, and how to apply this knowledge in their management and conservation. His research findings have been published in the major ecology and conservation journals.

Patricia Mateo-Tomás is a postdoctoral researcher at the Centre of Functional Ecology (CFE) at the University of Coimbra, Portugal and the Oviedo University, Spain. Her work focuses on the ecology and conservation of scavengers, especially vultures but also other facultative vertebrate scavengers, and their relationships with human activities, such as hunting and livestock rearing (including transhumance) that have developed in natural ecosystems. She is particularly committed to bridging the gap between scientific knowledge and wildlife management and conservation through close collaboration with private and public stakeholders.

José A. Sánchez Zapata is a Professor of Ecology at the Department of Applied Biology, Universidad Miguel Hernández, Orihuela, Spain. His research initially focused on the ecology and conservation of raptors, but during the last decade he has broadened the topics to include the role of scavenger guilds in ecosystem functioning and services under a socio-ecological framework. He has pursued research in Africa, America, Asia, Australia and Europe and has published papers in international ecology and conservation journals.