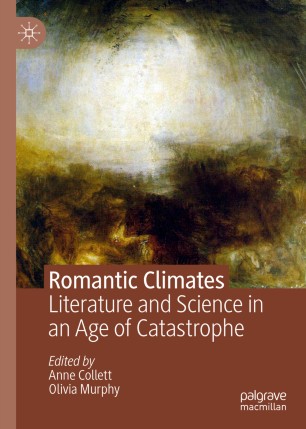 Literature and Science in an Age of Catastrophe

This book seeks to uncover how today’s ideas about climate and catastrophe have been formed by the thinking of Romantic poets, novelists and scientists, and how these same ideas might once more be harnessed to assist us in the new climate challenges facing us in the present.

The global climate disaster following Mt Tambora’s eruption in 1815 – the ‘Year without a Summer’ – is a starting point from which to reconsider both how the Romantics responded to the changing climates of their day, and to think about how these climatic events shaped the development of Romanticism itself.

As the contributions to this volume demonstrate, climate is an inescapable aspect of Romantic writing and thinking. Ideologies and experiences of climate inform everything from scientific writing to lyric poetry and novels. The ‘Diodati circle’ that assembled in Geneva in 1816 – Lord Byron, Percy and Mary Shelley, John Polidori and John Cam Hobhouse and the gothic novelist MG ‘Monk’ Lewis – is synonymous with the literature of that dreary, uncanny season. Essays in this collection also consider the work of Jane Austen, John Keats and William Wordsworth, along with less well-known figures such as the scientist Luke Howard, and later responses to Romantic climates by John Ruskin and Virginia Woolf.