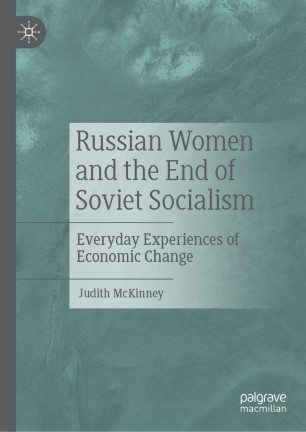 Russian Women and the End of Soviet Socialism

Initially expected to bring efficiency to the Russian economy and prosperity to Russian society, the shock therapy of price liberalization, privatization and macroeconomic stabilization introduced under Boris Yeltsin was quickly condemned as having worsened the lives of most Russians. Based on conversations with more than two dozen women in a provincial Russian capital, this book takes a retrospective look at these economic policies and explores how they transformed the trajectory of the lives of these women- both positively and negatively- in the family and in the workplace. McKinney considers the everyday experiences of the women as they provided for their families, established businesses, travelled abroad, and adjusted to the new economic, political and social environment of the Late Soviet and Post-Soviet era. Through their divergent experiences, Russian Women and the End of Soviet Socialism casts light on how these women view issues of gender, ethnicity, domestic and international politics, and the end of the Soviet experiment.

Students and scholars across a range of disciplines, including gender studies, sociology, economics and history, will find this book of interest.

“McKinney’s book can be situated at the crossroads of economics, women’s studies, history and oral history. … This book is useful for those who want to understand the relationship between policymaking and daily practices, the current Russian situation from a historical perspective, gender role constellations in Russia and the outcome of the abrogation of the state-supported gender contract.” (Tetiana Havlin, Europe-Asia Studies, August 20, 2021)

“This volume makes a welcome and valuable addition to the literature on the everyday experiences of women during the tumultuous period of Gorbachev’s reforms during the late 1980s in the Soviet Union and in the years following the country’s collapse in 1991. … This volume is likely to find its place in Russian and Soviet women’s history and gender studies.” (Melanie Ilic, Slavonic and East European Review SEER, Vol. 99 (2), April, 2021)

“Drawing on interviews she conducted with Russian women, McKinney illuminates the wrenching transformations of the post-Soviet period on everyday life.  With respect and quiet admiration she listened in on what her protagonists had to say, skilfully capturing the resiliency, pluck, and acceptance they demonstrated in negotiating life in the new Russia. This is a book about harsh realities. But also about hope.” (Donald J. Raleigh, University of North Carolina, USA)
Buy options