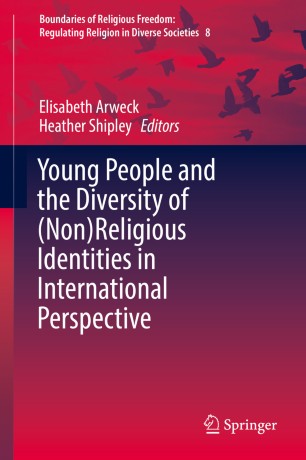 This volume brings together current research on young people, (non)religion, and diversity, documenting the forms young people’s stances may take and the social or spatial contexts in which these may be formed. The social contexts studied include the family, school, and faith communities. The spatial contexts include (sub)urban and rural geographies and places of worship and pilgrimage.
Youth and (non)religion are an area of academic interest that has been gaining increasing attention, especially as it pertains to youthful expressions of (non)religion and identities. As research on religion and young people spans and expands across academic disciplines and across geographic areas, comparative approaches and perspectives, such as presented in this volume, offer important spaces for reflecting about the experience of religiosity among young people and the ways they are learning about, and developing, (non)religious identities. Building bridges geographically and methodologically, this volume provides an international perspective on religion and nonreligion among young people, offering a diversity of religious and nonreligious perspectives.

Elisabeth Arweck’s research focuses on religion, young people, and education and includes topics such as religious socialisation, religious education (in school and other contexts), religion in families, values, religious communities, religious diversity/multiculturalism, and migration/immigration. Her recent research has focused on young people’s attitudes to religious diversity and the religious socialisation and nurture of young people. Recent publications include a number of (co-authored) articles and (co-edited) volumes, such as Young People’s Attitudes to Religious Diversity (Routledge 2017), Education about Religions and Worldviews: Promoting Intercultural and Interreligious Understanding in Secular Societies (with Anna Halafoff and Donald Boisvert, Routledge 2016), Religion and Knowledge (with Mathew Guest, Ashgate 2012), Exploring Religion and the Sacred in a Media Age (with Chris Deacy, Ashgate 2009), and Reading Religion in Text and Context (with Peter Collins, Ashgate 2006). She is the author of several book chapters and of Researching New Religious Movements in the West (Routledge 2007) and co-author (with Peter Clarke) of New Religious Movements in Western Europe: An Annotated Bibliography (Greenwood Press 1997).
Heather Shipley’s research focuses on the intersections of religious and sexually diverse identities, as they are constructed, managed, and experienced in education, the media, and the law. Recent publications include Identities Under Construction (with P. Dickey Young, McGill-Queen’s University Press, forthcoming), “Christianity, Gender and Identity among Canadian Youth” (with P. Dickey Young) in The Brill Handbook of Global Christianity (edited by S. Hunt, Brill Academic Press 2015), “Belief, Not Religion: Youth Negotiations of Religious Identity in Canada”(with P. Dickey Young) in Handbook on Child and Youth Studies (edited by J. Wyn and H. Cahill, Springer 2014); Globalized Religion and Sexual Identity: Contexts, Contestations, Voices (editor, Brill Academic Press 2014), and Religion and Sexuality: Diversity and the Limits of Tolerance (edited, with P. Dickey Young and T. Trothen UBC Press 2015).