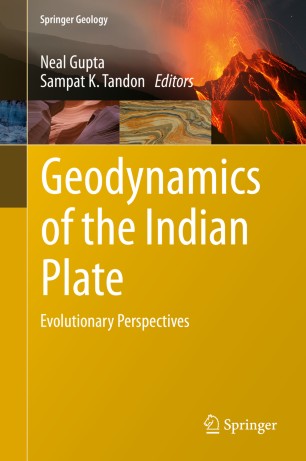 Geodynamics of the Indian Plate

This book provides insights on new geological, tectonic, and climatic developments in India through a time progression from the Archean to the Anthropocene that are captured via authoritative entries from experts in earth sciences. This volume aims to bring graduate students and researchers up to date on the geodynamic evolution of the Indian Plate; concepts that have so far resulted in a rather uneven treatment of the subject at different institutions.

The book is divided into 4 sections and includes perspectives such as the formation and evolution of the Indian crust in comparison to its neighbors such as Antarctica, Africa and Australia; the evolution of Precambrian cratons and sedimentary basins of India; and a summary account of early life reported in the Indian stratigraphic record. Readers will also discover the key recent research into the neotectonics, tectonic geomorphology, and paleoseismology of the Himalayan Front. Researchers and students in geology, earth sciences, sedimentology, paleobiology and geography will find this book appealing.

Dr. S.K. Tandon is a Fellow of the Indian National Science Academy and held Professorships at Indian Institute of Technology, Kanpur and IISER Bhopal, India. He was a full Professor at the University of Delhi and the Pro-Vice Chancellor of the University of Delhi. He has published over 100 research papers in geology, sedimentology, climatology and geomorphology.

Dr. Neal Gupta is a researcher and is currently developing an IT-Education and research business called CEdR/academic in Boston, MA that leverages current I/T for educators, scientists and in specific service areas. Formerly, he was a research scientist and adjunct professor in the Department of Science and Technology at Bryant University where he worked in the areas of organic geochemistry, geobiology, and molecular archaeology. He has worked on the biomolecular transformation of organisms such as arthropods and leaves and the geochemistry of plant and arthropod fossils in an attempt to understand the fate of biopolymers such as chitin, lignin, cutin and proteins in modern organisms and their contribution to sedimentary organic matter that has led to several research papers in peer reviewed journals.