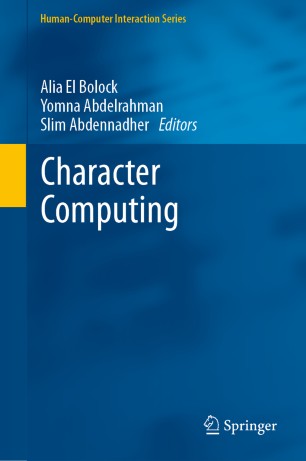 The book gives an introduction into the theory and practice of the transdisciplinary field of Character Computing, introduced by Alia El Bolock.

The latest scientific findings indicate that “One size DOES NOT fit all” in terms of how to design interactive systems and predict behavior to tailor the interaction experience. Emotions are one of the essential factors that influence people’s daily experiences; they influence decision making and how different emotions are interpreted by different individuals. For example, some people may perform better under stress and others may break.

Building upon Rosalind Picard’s vision, if we want computers to be genuinely intelligent and to interact naturally with us, we must give computers the ability to recognize, understand, even to have and express emotions and how different characters perceive and react to these emotions, hence having richer and truly tailored interaction experiences.

Psychological processes or personality traits are embedded in the existing fields of Affective and Personality Computing. However, this book is the first that systematically addresses this including the whole human character; namely our stable personality traits, our variable affective, cognitive and motivational states as well as our morals, beliefs and socio-cultural embedding. The book gives an introduction into the theory and practice of the transdisciplinary field of Character Computing. The emerging field leverages Computer Science and Psychology to extend technology to include the whole character of humans and thus paves the way for researchers to truly place humans at the center of any technological development.

● Profiling and sensing the character

● Investigating how to extend Artificial Intelligence to create artificial characters