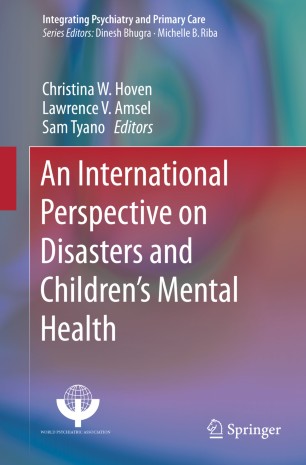 An International Perspective on Disasters and Children's Mental Health

This book provides a broad international perspective on the psychological trauma faced by children and adolescents exposed to major disasters, and on the local public health response to their needs. An outstanding quality of the book is that it draws upon the experience of local researchers, clinicians, and public mental health practitioners who dedicated themselves to these children in the wake of overwhelming events. The chapters address exemplary responses to a wide variety of trauma types, including severe weather, war, industrial catastrophes, earthquakes, and terrorism. Because disasters do not recognize geographic, economic, or political boundaries, the chapters have been selected to reflect the diverse global community’s attempt to respond to vulnerable children in the most challenging times. The book, thus, examines a diverse range of healthcare systems, cultural settings, mental health infrastructure, government policies, and the economic factors that have played an important role in responses to traumatic events. The ultimate goal of this book is to stimulate future international collaborations and interventions that will promote children’s mental health in the face of disaster.

Christina W. Hoven, DrPH, MPH is Director of the Global Psychiatric Epidemiology Group, Professor of Epidemiology and Psychiatry, Mailman School of Public Health, and the College of Physicians and Surgeons, Columbia University, and Research Scientist, Division of Child and Adolescent Psychiatry, the New York State Psychiatric Institute. She was Principal Investigator of the 2002 NYC Board of Education World Trade Center Survey (N= 8,236), which received international recognition as the first investigation to provide a comprehensive evaluation of a large representative sample of children, both distal and proximal to a disaster, leading to her ongoing investigations of the transmission of trauma. Currently, Dr. Hoven is conducting several longitudinal, epidemiologic investigations in the United States, and is involved internationally in a number of studies and other related activities.

Lawrence V. Amsel, MD, MPH is a clinical and research psychiatrist and is on the faculty of Columbia University, where he also completed an MPH. This gives him a strong theoretical background in psychiatric epidemiology. In the Global Psychiatric Epidemiology Group (GPEG) at Columbia, he serves as Associate Director and is involved with multiple federally-funded longitudinal cohort studies of children and adolescents who have faced trauma and severe stress. This includes one of the largest cohorts of individuals directly exposed to the WTC attacks as children, who continue to be studied for psychiatric, functional, and physical medicine sequelae of that exposure. Dr. Amsel, who has a mathematics background, has worked to introduce decision science concepts, such as game theory and delay discounting, into psychiatric research. He was instrumental in designing a study of the decision-making processes and subsequent consequences for children exposed to the WTC attacks. Dr. Amsel practices psychiatry at New York Presbyterian Hospital, teaches psychiatry at Columbia’s Mailman School of Public Health, and, with the REACH organization, trains primary care physicians to manage psychiatric issues in their practices.

Sam Tyano, MD is a Professor Emeritus in Psychiatry at the Tel Aviv University School of Medicine, Israel. He is the co-author of four textbooks on adult, child, and adolescent psychiatry. He is Honorary President of the Israeli Child and Adolescent Psychiatric Association and a previous President of the Israeli Medical Council. He has also chaired the National Board on Mental Health. Dr. Tyano served for 20 years as the Director of the Geha Psychiatric Hospital, and is Fellow of the RCPsych, WPA, IMA, APA, and Doctor Honoris Causa at the Bekhterev Institute in St. Petersburg, Russia. His main topics of research and publication are suicide, PTSD, ADHD, and infant psychiatry. Dr. Tyano served as member of the WPA Ethics Committee for six years, and later chaired the committee. Currently, Dr. Tyano is working in an infant psychiatry outpatient clinic.