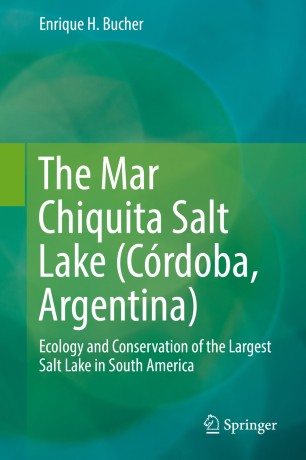 Ecology and Conservation of the Largest Salt Lake in South America

This book provides a comprehensive, updated syntheses of all the information available on Mar Chiquita, covering a various aspects of the geography, geological history, biology and ecology of the site, as well as a detailed analysis of the current land-use patterns, environmental threats, and conservation issues. Mar Chiquita, located in the province of Cordoba, Argentina, is a protected wilderness area that includes South America’s largest saline lake and wetland. It has a very rich bird biodiversity, including three of the six species of flamingos that exist in the world, and high numbers of intercontinental migratory shorebirds. For this reason, the area has been declared an International Site by the Ramsar Convention on Wetlands of International Importance, and also a Site of Hemispheric Importance by the Western Hemisphere Shorebird Reserves Network. Largely unknown until very recently, particularly in terms of the English literature, the site is rapidly gaining international visibility, not only in terms of scientific research, but also as site of interest for the nature lovers around the globe. Written in a language accessible to the non-specialists, the book focuses on integrating the dynamic, functional processes in the ecosystem, while at the same time providing the necessary descriptive information. Accordingly, it is of interest to scientists from diverse disciplines interested in saline wetlands, as well as to students, managers, and the general public.

Enrique H. Bucher is a biologist, Emeritus Professor at the Universidad Nacional de Córdoba, Argentina, and a leading Argentine Research Council (CONICET) researcher. His main research focuses include the ecology and management of semi-arid regions in South America. During his career, Enrique has been full professor, director of the Centro de Zoología Aplicada, and director of the postgraduate program in Wildlife Management at the Universidad Nacional de Córdoba. He is currently director of PROMAR, a long-term research program based at the Mar Chiquita Lake. Published work includes over 180 papers and book chapters in scientific peer- reviewed journals, and three co-authored books in English, and also was the editor of a book on the Mar Chiquita Lake published by de Argentine Academy of Sciences, in Spanish. He is a fellow of the Argentine Academy of Sciences, and of the British Ornithological Union and the American Ornithologists’ Union, and an honorary member of the American Ecological Society (USA). He has also been nominated fellow of the Pew Scholars Program in conservation and the environment (Pew Foundation, USA). In addition to his academic career, Enrique has been actively involved in biodiversity conservation, particularly in the Gran Chaco ecoregion of Argentina, Bolivia and Paraguay, focusing on a wide range of ecosystem function and management issues. He also received the Konex Foundation Prize for the best Argentine scientists (discipline: Zoology). He has also been a board member of a number of international conservation organizations, including the Western Hemisphere Shorebird Reserve Network, Wetlands for the Americas, Bird Life International, and also a member of the Permanent Executive Committee, International Ornithological Council.