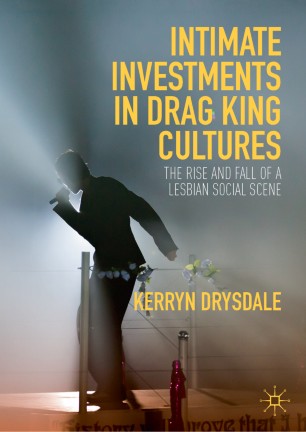 The Rise and Fall of a Lesbian Social Scene

This book takes the globally recognised phenomenon of drag king performances as an opportunity for critical inquiry into the rise and fall of an urban scene for lesbian and queer women in Sydney, Australia (circa 1999-2012). Exploring how a series of weekly events provided the site for intimate encounters, Drysdale reveals the investments made by participants that worked to sustain the sense of a small world and anchor the expansive imaginary of lesbian cultural life. But what happens when scenes fade, as they invariably do? Intimate Investments in Drag King Cultures is unique in capturing the perspective of a scene at the moment of its decline, revealing the process by which a contemporary movement becomes layered with historical significance. Bringing together the theoretical tradition of scene studies with recent work on the affective potentialities of the everyday and the mobile urban spaces they inhabit, this book has appeal to scholars working across gender, sexuality and culture.

Kerryn Drysdale is a Research Fellow at the Centre for Social Research in Health at UNSW Sydney, Australia.

“This book is a much needed and timely contribution to queer and performance studies as well as to feminist geography. … Drysdale’s book is much more than just an entertaining account of one of Sydney’s subcultures as she offers a theoretically nuanced expansion of concepts of scene and scene thinking. … this book is a much-welcomed contribution to its field as other scholars can draw on Drysdale’s work to fill the gaps the present case study was unable to cover.” (Maryna Shevtsova, Gender, Place & Culture, October 15, 2019)
Buy options