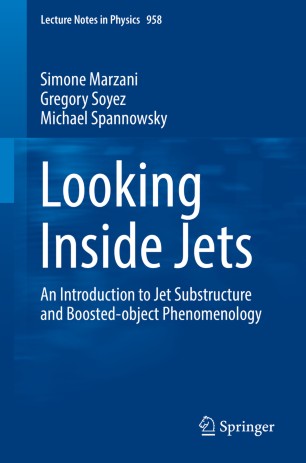 An Introduction to Jet Substructure and Boosted-object Phenomenology

This concise primer reviews the latest developments in the field of jets. Jets are collinear sprays of hadrons produced in very high-energy collisions, e.g. at the LHC or at a future hadron collider. They are essential to and ubiquitous in experimental analyses, making their study crucial.

At present LHC energies and beyond, massive particles around the electroweak scale are frequently produced with transverse momenta that are much larger than their mass, i.e., boosted. The decay products of such boosted massive objects tend to occupy only a relatively small and confined area of the detector and are observed as a single jet. Jets hence arise from many different sources and it is important to be able to distinguish the rare events with boosted resonances from the large backgrounds originating from Quantum Chromodynamics (QCD). This requires familiarity with the internal properties of jets, such as their different radiation patterns, a field broadly known as jet substructure.

This set of notes begins by providing a phenomenological motivation, explaining why the study of jets and their substructure is of particular importance for the current and future program of the LHC, followed by a brief but insightful introduction to QCD and to hadron-collider phenomenology. The next section introduces jets as complex objects constructed from a sequential recombination algorithm. In this context some experimental aspects are also reviewed. Since jet substructure calculations are multi-scale problems that call for all-order treatments (resummations), the bases of such calculations are discussed for simple jet quantities.