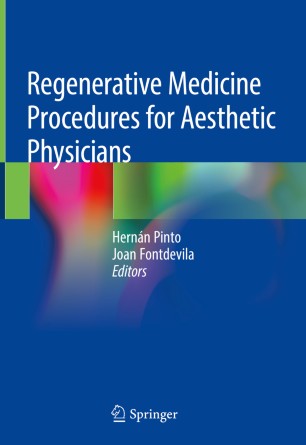 This book presents the state-of-art in regenerative procedures currently applied by aesthetic physicians, plastic surgeons and dermatologists. It is divided into two parts, the first of which provides a detailed introduction to aesthetic medicine and the aging process. The second part, in turn, addresses the current status of techniques and technologies with regard to autologous grafts, covering fat transfer, blood grafts, skin grafts and stem cells. The book examines the surgical applications of these grafts, as well as potential side effects and limitations. Therapy combinations and outcomes round out the coverage. Aesthetic physicians, plastic surgeons and dermatologists interested in performing regenerative procedures for aesthetic purposes will find this book to be a valuable guide.

Dr. Hernán Pinto received his medical degree from the public University of Buenos Aires, Argentina, in 2001. He subsequently worked in the area of aesthetic medicine and became a staff member at the Transplant Coordination Department of Hospital Clinic Barcelona, Spain, from 2004 to 2007. In 2006, he has been certified as an European Transplant Coordinator(ETCO). Since 2007, he worked at his private consultation. Since 2011, Dr. Pinto has also been Director of the i2e3 Biomedical Research Institute (i2e3), Barcelona, Spain. In 2015, he received his PhD with a thesis on Autologous Conditioned Serums. He is MSc on research design and data analysis. As a researcher, teacher and physician, he has taught classes and actively collaborated with universities around the world. He is a regularly invited professor for Aesthetic Medicine Masters throughout Europe and Latin America, full professor of the Master courses "Aesthetic care for oncologic patients" and "Aesthetic Medicine", both at University of Alcalá (UAH), Madrid, Spain, and he is Co-director of the Expert Course for Medical Writing at the same university. Dr. Pinto was awarded as an honorary Professor at Yichun University, China, and holds positions at several scientific societies. Among others, he is Vocal of Spanish Medical Writers Association (AERTeM), Technical Director of the Research Commission of Aesthetic Medicine Spanish Society (SEME), and Main Handling Editor of the official Journal of the International Union of Aesthetic Medicine (UIME).
Dr. Joan Fontdevila received his MD degree from the University of Barcelona in 1994, and would go on to complete his PhD at the same University in 2008 with a thesis on fat grafting in HIV lipoatrophy. He has been a Certified Specialist for Aesthetic and Reconstructive Plastic Surgery since 1999. He was a visiting scholar at Stanford University, USA. Currently he holds the position of Head of the Plastic Surgery Department at the Hospital Clinic of the University of Barcelona, Spain, and is an Associate Professor at the Department of Surgery, University of Barcelona, Spain. The focus of his practice and research activities is on fat grafting and breast surgery, and he published more than 30 articles in indexed journals on these topics. He is a founding member and Vice-President of the Spanish Society of Fat Transplantation (SETGRA) and Secretary of the Spanish Society of Plastic Reconstructive and Aesthetic Surgery (SECPRE). Dr. Fontdevila is also a proud recipient of the "Sherrell J. Aston Award" from the American Society of Aesthetic Plastic Surgery & Aesthetic Surgery Education and Research Foundation, which he was honored with in 2007 for his research on fat grafting procedures in the face.