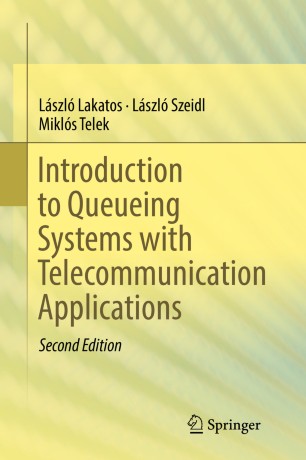 The book is the extended and revised version of the 1st edition and is composed of two main parts: mathematical background and queueing systems with applications. The mathematical background is a self-containing introduction to the stochastic processes of the later studied queueing systems. It starts with a quick introduction to probability theory and stochastic processes and continues with chapters on Markov chains and regenerative processes. More recent advances of queueing systems are based on phase type distributions, Markov arrival processes and quasy birth death processes, which are introduced in the last chapter of the first part.
The second part is devoted to queueing models and their applications. After the introduction of the basic Markovian (from M/M/1 to M/M/1//N) and non-Markovian (M/G/1, G/M/1) queueing systems, a chapter presents the analysis of queues with  phase type distributions, Markov arrival processes (from PH/M/1 to MAP/PH/1/K). The next chapter presents the classical queueing network results and the rest of this part is devoted to the application examples. There are queueing models for bandwidth charing with different traffic classes, slotted multiplexers, media access protocols like Aloha and IEEE 802.11b, priority systems and retrial systems.
An appendix supplements the technical content with Laplace and z transformation rules, Bessel functions and a list of notations. The book contains examples and exercises throughout and could be used for graduate students in engineering, mathematics and sciences.
Reviews of first edition:
"The organization of the book is such that queueing models are viewed as special cases of more general stochastic processes, such as birth-death or semi-Markov processes. … this book is a valuable addition to the queuing literature and provides instructors with a viable alternative for a textbook to be used in a one- or two-semester course on queueing models, at the upper undergraduate or beginning graduate levels."
Charles Knessl, SIAM Review, Vol. 56 (1), March, 2014