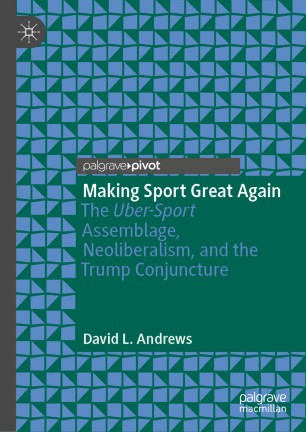 The Uber-Sport Assemblage, Neoliberalism, and the Trump Conjuncture

“With the publication of the brilliant Making Sport Great Again, Professor David L. Andrews firmly establishes himself as the leading social theorist of sport in late-capitalist consumer culture. There is no better scholarly guide to the politicized and politicizing nature and influence of contemporary sports on society than Andrews’ perceptive words and always-challenging ideas. Theoretically rich and empirically grounded, Making Sport Great Again is both an intellectual and political intervention into the hyper-commodified, commercialized spectacle that is modern corporate uber-sport, a diagnostic analysis of neo-liberal sports cultures of the highest order that deserves to become an instant classic.”

“One of the world’s leading scholars in sport and physical cultural studies, Andrews offers an expertly crafted and potent analysis of the complex relationship between sport and politics, with particular focus on the Trump era. Highly recommended as essential reading for anyone and everyone interested in understanding the intricate webs of power relations that weave sport, politics, culture and the economy together in ways that impact bodies and minds, the world over.”

Blending critical theory, conjunctural cultural studies, and assemblage theory, Making Sport Great Again introduces and develops the concept of uber-sport: the sporting expression of late capitalism’s conjoined corporatizing, commercializing, spectacularizing, and celebritizing forces.  On different scales and in varying spaces, the uber-sport assemblage is revealed both to surreptitiously reinscribe the neoliberal preoccupation with consumption and to nurture the individualized consumer subject. Andrews further probes how uber-sport normalizes the ideological orientations and associate affective investments of the Trump assemblage’s authoritarian populism. Even as it articulates the regressive politicization of sport, Making Sport Great Again serves also as a call to action: how might progressives rearticulate uber-sport in emancipatory and actualizing political formations?