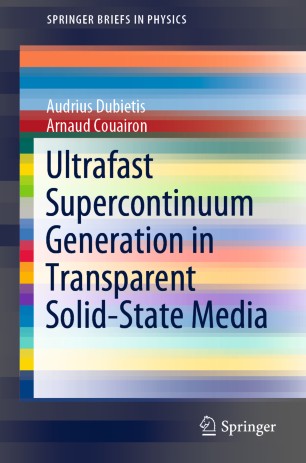 This book presents the underlying physical picture and an overview of the state of the art of femtosecond supercontinuum generation in various transparent solid-state media, ranging from wide-bandgap dielectrics to semiconductor materials, and across various parts of the optical spectrum, from the ultraviolet to the mid-infrared. A particular emphasis is placed on the most recent experimental developments: multioctave supercontinuum generation with pumping in the mid-infrared spectral range, spectral control, power and energy scaling of broadband radiation and the development of simple, flexible and robust pulse compression techniques, which deliver few optical cycle pulses and which could be readily implemented in a variety of modern ultrafast laser systems. The expected audience includes graduate students, professionals and scientists working in the field of laser-matter interactions and ultrafast nonlinear optics.

Audrius Dubietis graduated from Vilnius University in 1989, and was awarded a PhD in 1996. He has been professor in the Department of Quantum Electronics, Laser Research Center, Vilnius University, since 2006. His areas of research areas include nonlinear optics, laser physics, atmospheric phenomena, physics, optics, and astronomy. In 1992, together with G. Jonušauskas and A. Piskarskas, he proposed a method of parametric amplification of phase-modulated light pulses, which is implemented by the most important ultra-powerful laser centers worldwide. He has published more than 90 scientific articles in the peer-reviewed literature.
Arnaud Couairon is a research director at the CNRS. He studied at Ecole Normale Supérieure in Paris and did his Ph.D. at Ecole Polytechnique (1997) on the dynamics of open shear flows. Since 1997, he has been working on ultrashort laser pulse filamentation and associated phenomena. He developed a virtual numerical laboratory for simulating the nonlinear propagation of ultrashort laser pulses in gases, liquids, or solids. His research interests include laser-matter interaction, ultrafast and nonlinear optics, and plasma physics.