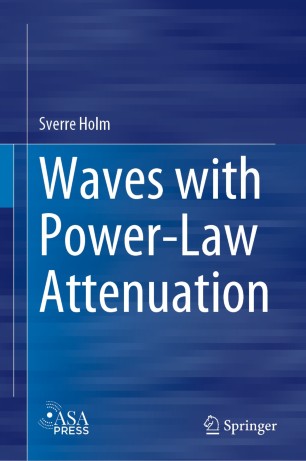 This book integrates concepts from physical acoustics with those from linear viscoelasticity and fractional linear viscoelasticity. Compressional waves and shear waves in applications such as medical ultrasound, elastography, and sediment acoustics often follow power law attenuation and dispersion laws that cannot be described with classical viscous and relaxation models. This is accompanied by temporal power laws rather than the temporal exponential responses of classical models.

The book starts by reformulating the classical models of acoustics in terms of standard models from linear elasticity. Then, non-classical loss models that follow power laws and which are expressed via convolution models and fractional derivatives are covered in depth. In addition, parallels are drawn to electromagnetic waves in complex dielectric media. The book also contains historical vignettes and important side notes about the validity of central questions. While addressed primarily to physicists and engineers working in the field of acoustics, this expert monograph will also be of interest to mathematicians, mathematical physicists, and geophysicists.

Sverre Holm was born in Oslo, Norway, in 1954. He received M.S. and Ph.D. degrees in electrical engineering from the Norwegian Institute of Technology (NTNU), Trondheim in 1978 and 1982, respectively.

He has academic experience from NTNU and Yarmouk University in Jordan (1984-86). Since 1995 he has been a professor of signal processing and acoustic imaging at the University of Oslo. In 2002 he was elected a member of the Norwegian Academy of Technological Sciences.

His industry experience includes GE Vingmed Ultrasound (1990-94), working on digital ultrasound imaging, and Sonitor Technologies (2000-05), where he developed ultrasonic indoor positioning. He is currently involved with several startups in the Oslo area working in the areas of acoustics and ultrasonics.

“The book is interesting if you want to enter the field of fractional rheology. This is an actual topic of research that may be quite promising and this book is a helpful tool to take a first step in the subject. In my opinion it is well written and it is highly readable with technical details under control. I have highly appreciated the idea of integrating several ideas from physical acoustics with those from linear viscoelasticity.” (Giuseppe Saccomandi, Mathematical Reviews, November, 2019)
Buy options