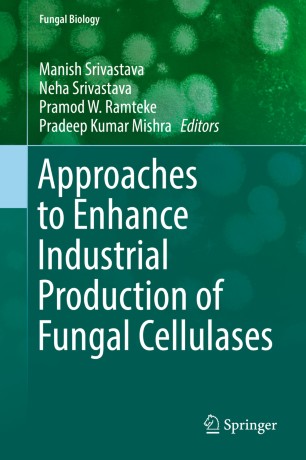 Cellulase is a key enzyme of industrial interest and plays a crucial role in the hydrolysis of cellulose, a prime component of plant cell walls. Cellulase covers a broad area in the global market of industrially important enzymes and it is considered as the third largest industrial enzyme globally. Additionally, cellulase contributes about 20% of the total enzyme market globally because of its massive demand in various industries such as in biofuel production, pulp, paper, textile, food, and beverages, as well as in detergent industries. Among these, the demand of cellulase may become frequently selected in the commercial production of biofuels in the future and thus will further increase demand of cellulase in the biofuel industry. Because biofuel production is still not realized in a cost-effective, practical implementation due to its high cost (the higher cost of biofuels is due to higher production costs of enzymes), there is a need to introduce these types of approaches, which will help to lower the cost of enzyme production for developing overall economic biofuel production.

Manish Srivastava is working as DST INSPIRE faculty in the Department of Physics and Astrophysics, University of Delhi, India. He has published 41 research articles in peer reviewed journals, authored several book chapters and filed 1 patent. He worked as a post doctorate fellow in the Department of BIN Fusion Technology, Chonbuk National University from August 2012 to August 2013. He was an Assistant Professor in the Department of Physics, DIT School of Engineering, Greater Noida, from July 2011 to July 2012. He received his Ph. D. in Physics from the Motilal Nehru National Institute of Technology (MNNIT), Allahabad, India in 2011. Presently, he is working on the synthesis of graphene based metal oxide hybrids and their applications as catalysts. His area of interest is synthesis of nanostsructured materials and their applications as catalyst for development of electrode materials in energy storage, biosensors and biofuels production.
Neha Srivastava is currently working as Post-doctorate fellow in Department of Chemical Engineering and Technology, IIT (Banaras Hindu University) Varanasi, India. She has published 26 research articles in the in peer reviewed journals and have 03 patents. She has been completed her PhD from Department of Molecular and Cellular Engineering, SHUATS, India in 2016 in the area of bioenergy. She has been received 06 Young Scientist Awards. Presently, she is working on biofuels production (Cellulase enzymes; production and enhancement, biohydrogen production from waste biomass, bioethanol production).
P. K. Mishra is currently Professor and Head in the Department of Chemical Engineering & Technology, Indian Institute of Technology (BHU), Varanasi, India. He obtained his PhD degree in Chemical Engineering from Institute of Technology (Banaras Hindu University) in 1995. He has authored/co-authored over 60 technical papers published in reputed national/international journals and supervised more than 20doctoral students. He has received several awards and hounours and has 5 patents. He is Fellow of Institution of Engineers India. He has received several awards and honours at National/International levels. He has also made significant contribution towards development of entrepreneurship ecosystem in Eastern part of the country. He is coordinator Technology Business Incubator at the Institute and member Executive committee NISBUD, Ministry of Skill Development, Government of India.
Pramod W. Ramteke is presently Dean of Post Graduate Studies and Heads of Departments of Biological Sciences and Genetics & Plant Breeding at San Higginbottom University of Agriculture, Technology and Sciences (SHUATS), Allahabad, India. He is elected Fellow of National Academy of Agricultural Sciences, National Academy of Biological Sciences, The Linean Society of London, Academy of Microbial Sciences India (AMI), The Biotech Research Society of India, Society for Plant Protection Sciences, Mycological Society of India, Uttar Pradesh Academy of Agricultural Sciences, Maharashtra Academy of Sciences, Association for Biotechnology and Pharmacy, Society of Biological Sciences and Rural Development  and The Academy of Environmental Biology. He is recipient of J.C. Bose Gold Medal, SCON Memorial Award for Excellence in Science, Dr. J. C. Edward Medal, Prof. K. S. Bilgramy Memorial Award, Er. V. S. Chauhan Gold Medal, Biotechnology Overseas Associateship and International Fellowship by Biotechnology and Biology Research Council, UK. He is member of editorial board of several journals He has been a visiting Scientist to Hacettepe University, Turkey; Institute of Food Research, UK; University of Liege, Belgium; Korea Institute of Science and Technology, South Korea, University of Szeged, Hungary and Hydrobiological Institute, Czech Republic. In addition to three patents, three books and over 150 research papers are to his credit. He has implemented 7 major projects from DBT, DST, CSIR, UPCAR and CST,UP and supervised 21 PhDs and more than 40 PG Thesis/projects. He was a member of 18th Indian Scientific Expedition to Antarctica (1998-99).