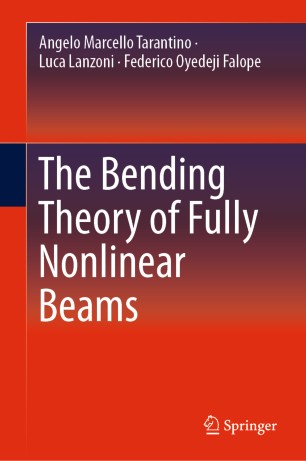 This book presents the bending theory of hyperelastic beams in the context of finite elasticity. The main difficulties in addressing this issue are due to its fully nonlinear framework, which makes no assumptions regarding the size of the deformation and displacement fields.  Despite the complexity of its mathematical formulation, the inflexion problem of nonlinear beams is frequently used in practice, and has numerous applications in the industrial, mechanical and civil sectors. Adopting a semi-inverse approach, the book formulates a three-dimensional kinematic model in which the longitudinal bending is accompanied by the transversal deformation of cross-sections. The results provided by the theoretical model are subsequently compared with those of numerical and experimental analyses. The numerical analysis is based on the finite element method (FEM), whereas a test equipment prototype was designed and fabricated for the experimental analysis. The experimental data was acquired using digital image correlation (DIC) instrumentation. These two further analyses serve to confirm the hypotheses underlying the theoretical model. In the book’s closing section, the analysis is generalized to the case of variable bending moment. The governing equations then take the form of a coupled system of three equations in integral form, which can be applied to a very wide class of equilibrium problems for nonlinear beams.

Angelo Marcello Tarantino is full professor of Structural Engineering at the University of Modena and Reggio Emilia, Italy.  Expert in theory of elasticity and structural engineering, he is author of textbooks and 100 scientific publications, of which 75 published in international journals, mainly as single author. He has carried out studies and research activities in France, England, United States, Switzerland and China. He is scientific responsible of several research projects.