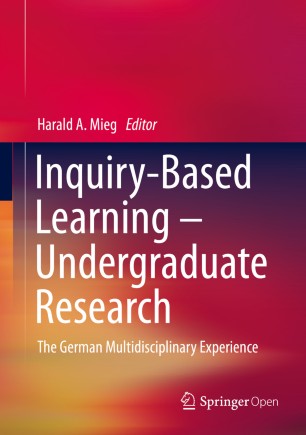 This open access book provides a systematic overview of experiences with Inquiry-Based Learning (IBL) and undergraduate research (UR) in German universities, covering both research universities (Universitäten) and universities of applied sciences (Fachhochschulen). Divided into three parts, the book starts with the principles and common practices of IBL/UR at all universities. Part Two discusses the implementation of IBL/UR for twenty-one individual disciplines, ranging from architecture to theology. Part Three discusses the potential of IBL/UR in relation to several topics including diversity, digitalisation, different forms of universities, and the national job market. The book summarises the project of the German network of UR, comprising approximately 50 universities, and results of a national initiative called Qualitätspakt Lehre which is intended to improve teaching at German universities.

Today IBL and UR are essential parts of high-impact education strategies for universities around the world. In his university reform plans of the early 19th century, Wilhelm von Humboldt introduced Inquiry-Based Teaching and Learning as the core principle of the modern research university in Germany, as well as worldwide. IBL was re-discovered in the German university reform initiatives of the 1960s. Since then, IBL has been applied in teachers' education in German universities. The book presents IBL/UR experience as complementary to what is usually presented in English-speaking academia. In Germany, IBL/UR is applied broadly throughout the social sciences and planning, but not in the core sciences, whereas in the US undergraduate research is common in the sciences but less so in the social sciences. Moreover, in Germany, IBL/UR is often linked to applied and community-oriented research — something that is just emerging in the US.