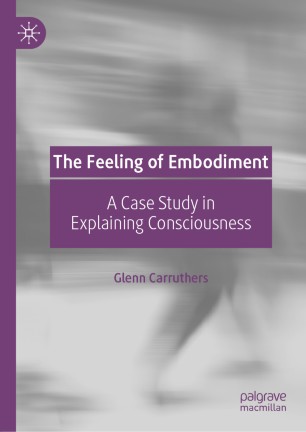 The Feeling of Embodiment

A Case Study in Explaining Consciousness

This book proposes a novel and rigorous explanation of consciousness. It argues that the study of an aspect of our self-consciousness known as the ‘feeling of embodiment’ teaches us that there are two distinct phenomena to be targeted by an explanation of consciousness. First is an explanation of the phenomenal qualities – 'what it is like' – of the experience; and second is the subject's awareness of those qualities. Glenn Carruthers explores the phenomenal qualities of the feeling of embodiment using the tools of quality spaces, as well as the subject's awareness of those qualities as a functionally emergent property of various kinds of processing of these spaces. Where much recent work on consciousness focuses on visual experience, this book rather draws evidence from the study of self-consciousness.
Carruthers argues that in light of recent methodological discoveries, awareness must be explained in terms of the organization of multiple cognitive processes. The book offers an explanation of anomalous body representations and, from that, poses a more general theory of consciousness. Ultimately this book creates a hybrid account of consciousness that explains phenomenology and awareness using different tools. It will be of great interest to all scholars of psychology and philosophy as well as anyone interested in exploring the intricacies of how we experience our bodies, what we are and how we fit into the world.

Glenn Carruthers is a lecturer in psychology at Charles Sturt University, Australia and has published a multitude of theoretical and experimental papers about consciousness and self-consciousness. He is a cognitive scientist and theoretical psychologist with interests in consciousness, psychopathology and moral change.