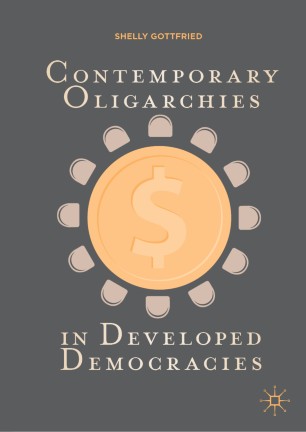 The book analyzes concentrations of wealth and power in developed democracies. It shows that economic measures, which states adopted during the 1980s and 1990s, had evolved first into liberal oligarchy, and later, after the 2007-2008 global financial crisis, into illiberal and populist oligarchy. The shape and content of these two kinds of oligarchy have been determined largely because of practices and political strategies that powerful state and market actors employed. This project will appeal to a wide audience including academics, researchers, students, and anyone who is interested in oligarchy political power, IR, political economy, and sociology.
Shelly Gottfried is Research Fellow and Lecturer at City, University of London, UK, and Beit-Berl Academic College, Israel.

“In the field of Israel Studies, there are few books that deal with the Israeli economy – in particular the change which recognized globalization in the 1980s and the rush towards privatization in the early years of the twenty-first century. Gottfried's work remedies this deficit.” (Colin Shindler, Emeritus Professor, SOAS, University of London, UK)

“Gottfried’s study offers a unique insight into the emergence and function of Israel’s oligarchic clans.  She reveals the origins, control mechanisms and institutional connections between the state, major business groups, economic sectors and the media. A compelling read for anyone interested in the political economy of contemporary Israel, and the role of oligarchies in global capitalism.” (Anastasia Nesvetailova, Professor of IPE, City, University of London, UK)

“This is an important in-depth analysis of crony capitalism in Israel, and a fascinating outlook on the development of the Israeli political economy over the past decades. Shelly offers rich insights on the nature of political and economic power in Israel, one of the most understudied topics in international and comparative political economy, yet an arena that can offer far reaching perspectives and lessons. This book not only provides a new understanding of the democracy-capitalism nexus; it is essential reading for anyone interested in contemporary Israel and the consequences of economic concentration in developed democracies.” (Guy Rolnik, Clinical Associate Professor, The University of Chicago Booth School of Business, USA)

“Shelly Gottfried’s highly impressive monograph expertly answers the key questions surrounding the relationship between political power and oligarchs in Israel’s contemporary political economy. The result is an excellent book, focusing on Israel but also rich in examples from elsewhere, which will be of great interest to those wishing to understand how oligarchs rise and why it matters so much.” (Amnon Aran, Senior Lecturer, City, University of London, UK)
Buy options