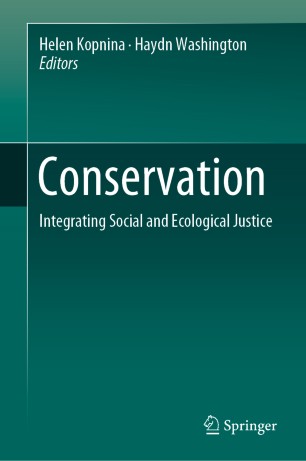 This book provides keys to decrypt current political debates on the environment in light of the theories that support them, and provides tools to better understand and manage environmental conflicts and promote environmentally friendly behaviour.

As we work towards global sustainability at a time when efforts to conserve biodiversity and combat climate change correspond with land grabs by large corporations, food insecurity, and human displacement. While we seek to reconcile more-than-human relations and responsibilities in the Anthropocene, we also struggle to accommodate social justice and the increasingly global desire for economic development. These and other challenges fundamentally alter the way social scientists relate to communities and the environment.

This book takes as its point of departure today’s pressing environmental challenges, particularly the loss of biodiversity, and the role of communities in protected areas conservation. In its chapters, the authors discuss areas of tension between local livelihoods and international conservation efforts, between local communities and wildlife, and finally between traditional ways of living and ‘modernity’. The central premise of this book is while these tensions cannot be easily resolved they can be better understood by considering both social and ecological effects, in equal measure. While environmental problems cannot be seen as purely ecological because they always involve people, who bring to the environmental table their different assumptions about nature and culture, so are social problems connected to environmental constraints. While nonhumans cannot verbally bring anything to this negotiating table, aside from vast material benefits that society relies on, the distinct perspective of this book is that there is a need to consider the role of nonhumans as equally important stakeholders – albeit without a voice. This book develops an argument that human-environmental relationships are set within ecological reality and ecological ethics and rather than being mutually constitutive processes, humans have obligate dependence on nature, not vice versa. This would enable an ethical position encompassing the needs of other species and giving simultaneous (without one being subordinated to another) consideration to justice for humans and non-humans alike.

The book is accessible to both social scientists and conservation specialists, and intends to contribute to strengthening interdisciplinary collaborations in the field of conservation.

Dr. Helen Kopnina (Ph.D. Cambridge University, 2002) is a researcher in the fields of environmental education and environmental social sciences.  Helen is currently employed at both at Leiden University and The Hague University of Applied Science (HHS) in The Netherlands. At the Leiden Institute of Cultural Anthropology and Development Sociology she is an Assistant Professor of environmental anthropology. At the HHS, she is a coordinator and lecturer of the Sustainable Business program.

Helen is the author of over 80 peer reviewed articles and (co)author and (co)editor of 12 books, including Sustainability: Key Issues (2015); Culture and Conservation: Beyond Anthropocentrism (2015); and Handbook of Environmental Anthropology (2016).