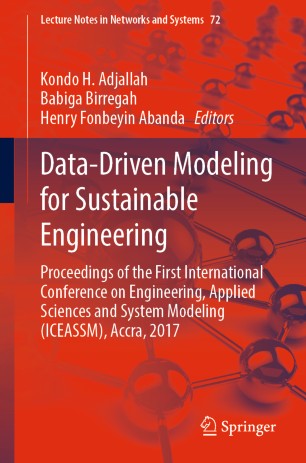 Part of the Lecture Notes in Networks and Systems book series (LNNS, volume 72)

This book gathers the proceedings of the 1st International Conference on Engineering, Applied Sciences and System Modeling (ICEASSM), a four-day event (18th–21st April 2017) held in Accra, Ghana. It focuses on research work promoting a better understanding of engineering problems through applied sciences and modeling, and on solutions generated in an African setting but with relevance to the world as a whole. The book provides a holistic overview of challenges facing Africa, and addresses various areas from research and development perspectives.

Presenting contributions by scientists, engineers and experts hailing from a host of international institutions, the book offers original approaches and technological solutions to help solve real-world problems through research and knowledge sharing. Further, it explores promising opportunities for collaborative research on issues of scientific, economic and social development, making it of interest to researchers, scientists and practitioners looking to conduct research in disciplines such as water supply, control, civil engineering, statistical modeling, renewable energy and sustainable urban development.

Prof. Kondo H. Adjallah is a distinguished Professor and a “Chevalier de l’Ordre des Palmes Académiques” in France. He has an M.S. degree in electrical and control engineering. He obtained a Ph.D. from the National Polytechnic Institute of Lorraine, France. He was an Associate Professor at the Université de Technologie de Troyes (UTT), France, from 1994 to 2008. Since September 2008, he became a full Professor at the Ecole Nationale d’Ingénieurs de Metz, where he is leading research activities at the LCOMS Laboratory of the University of Lorraine. His is visiting professor at University of Cincinnati in the USA. He contributed in cutting edge research in leading organisations including the CRAN of Nancy, Charles Delaunay Institute of Troyes and LGIPM at the University of Metz. His current research interests include data integration and analysis, reliability and degradation modeling, health condition monitoring and decision support for predictive maintenance. Currently, he is leading research activities on data driven modeling of risks, anticipation and resiliency, with focus on industrial data instrumentation, data collection, health information extraction, dependability decision support of sustainable infrastructures. He has been the chair of the French Research Working Group on “modeling and optimization of the distributed & collaborative maintenance” of the CNRS affiliated research group on “modeling, analysis and steering of dynamic systems” (GRD MACS). He is member of the IEEE society since 2002 and was the leader of the international cooperative research network for the management of durable infrastructures of development from 2007 to 2012. He is now leading the International Organization for Science and Engineering in Africa (IOSEA). Also, he is a fellow of the NSF Industry/University Cooperative Research Center on Intelligent Maintenance Systems. He has been a visiting Professor at the University of Cincinnati in 2005-2006 and 2010-2012. He has been nominated in 2014 Outstanding Professor of the Nanjing University of Aeronautics and Astronautics. Also in 2012, he was appointed as a Professor Habilitated of the Nanjing University of Science and Technology. He has published several journal and conference papers, journals special issue guest editor and was the main organizer of the international conference on Intelligent Maintenance Systems, July 15-16, 2004, Arles, France.
Dr. Babiga Birregah obtained a PhD in Applied Mathematics in 2007. He then joined the University of Technology of Troyes as a post-doctoral researcher  and researched on the Surveillance, Safety and Security Group (3SGS). In September 2009, he joined the CNRS Joint Unit Charles Delaunay Institute (ICD) as an assistant professor. Babiga’s research interests are on Data analysis for System security and resiliency with application in Cybersecurity and Crisis management. As member of ICD he has developed research activities in Resilience in the Interdisciplinary Group devoted to risk assessment and management technologies. He has participated in several projects, funded by regional and national agencies in Big Data. Also, he has worked with several companies in Railway and Security. From 2013 to 2016, Babiga was in charge of the DU "Criminal Operational Analysis" (co-labeled UTT and National Gendarmerie). Since 2016 he has been the management lead of the Specialized Master® Expert Big Analytics and Metrics of UTT. He is the author and contributor of several software systems dedicated to large scale graphs analysis and mass railway transportation systems.
Dr. Henry Abanda has a BSc (Hons) and Dipl.-Ing. in Mathematics/Physics and Civil Engineering, respectively. After obtaining his degree in Civil Engineering in 2003, he worked as a Project Engineer on projects funded by the governments of Cameroon and Japan. He obtained his PhD from the School of the Built Environment, Oxford Brookes University in the UK in 2011. Currently, he is a Senior Lecturer in the School and teaches Construction Project Management/Building Information Modelling at undergraduate and postgraduate levels. Also, he supervises PhD students in the area of Construction IT including Building Information Modelling (BIM). Henry has published extensively in top quality journals in the domains of BIM.