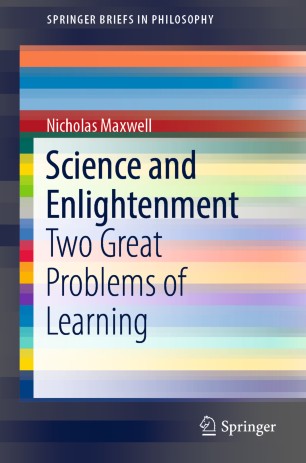 This book argues that two great problems of learning confront humanity: learning about the nature of the universe and about ourselves and other living things as a part of it; and learning how to become civilized. The author proposes that with the creation of modern science in the 17th century, the first problem was essentially solved.  But the second problem has still not been solved today, and that combination of solving the first problem, but failing to solve the second one, puts us in a situation of unprecedented danger.  All our current global problems are the result.  The 18th century Enlightenment tried to solve the second great problem of achieving world enlightenment by learning from the solution to the first problem, but in implementing this idea, they made three serious blunders.  These ancient blunders are still built into academia today.  Correct the three blunders we have inherited from the Enlightenment, and we would have what we so urgently need: institutions of learning, universities and schools, rationally designed and devoted to helping us resolve our conflicts and global problems, and thus make progress towards a good, genuinely civilized world.  Science and Enlightenment: Two Great Problems of Learning will interest a broad audience, ranging from academics, university students and teachers; journalists, politicians and general readers concerned about global problems and the fate of the world.

Nicholas Maxwell has devoted much of his working life to arguing that we need to bring about a revolution in academia so that it seeks and promotes wisdom and does not just acquire knowledge. He has published a number of books on this theme, including What’s Wrong With Science? (Bran's Head Books, 1976), From Knowledge to Wisdom (Blackwell, 1984), The Comprehensibility of the Universe (Clarendon Press, 1998), The Human World in the Physical Universe (Rowman and Littlefield, 2001), Is Science Neurotic? (Imperial College Press, 2004), How Universities Can Help Create a Wiser World: The Urgent Need for an Academic Revolution (Imprint Academia, 2014), Understanding Scientific Progress (Paragon House, 2017), In Praise of Natural Philosophy (McGill-Queen’s University Press, 2017), and Karl Popper, Science and Enlightenment (UCL Press, 2017).  He has also published several papers on this theme and on such diverse subjects as scientific method, the rationality of science, the philosophy of the natural and social sciences, the humanities, quantum theory, causation, the mind-body problem, aesthetics, and moral philosophy. For a book about his work see L. McHenry, ed., Science and the Pursuit of Wisdom: Studies in the Philosophy of Nicholas Maxwell (Ontos Verlag, 2009).  For nearly thirty years Maxwell taught philosophy of science at University College London, where he is now Emeritus Reader.  In 2003 he founded Friends of Wisdom, an international group of academics and educationalists concerned that universities should seek wisdom and not just acquire knowledge (see www.knowledgetowisdom.org). He has appeared on BBC Radio 4’s “Start the Week”, and on Canadian Broadcasting Corporation’s “Ideas” Programme. He has lectured at universities and at conferences throughout the UK, in Europe, USA, Canada, and Taiwan. For more about his work see http://www.ucl.ac.uk/from-knowledge-to-wisdom. ‘Arguing for Wisdom in the University’, a recent intellectual autobiography published in 2012, and many other articles available online at http://discovery.ucl.ac.uk/view/people/ANMAX22.date.html.