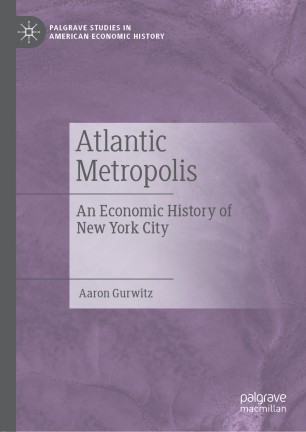 This book applies the contents of a working economist’s tool-kit to explain, clearly and intuitively, when and why over the course of four centuries individuals, families, and enterprises decided to locate in or around the lower Hudson River Valley.  Collectively those millions of decisions have made New York one of the twenty-first century’s few truly global cities.  A recurrent analytic theme of this work is that the ups and downs of New York’s trajectory are best understood in the context of what was happening elsewhere in the broader Atlantic world. Readers will find that the Atlantic perspective viewed through an economic lens goes a long way toward clarifying otherwise quite perplexing historical events and trends.

Aaron Gurwitz’s interest in his home town’s history began to germinate in the early 1980s he managed the Regional Economics group of the Federal Reserve Bank of New York.  He pursued this interest as an avocation through three decades while working as an economist and strategist at a series of global investment banks.  Since his retirement from that career in 2012 he has been able to devote most of his time to this subject, as an adjunct faculty member at local colleges and as the author of this volume.  He earned his PhD in economics with a specialization in urban and regional analysis at Stanford University, USA.