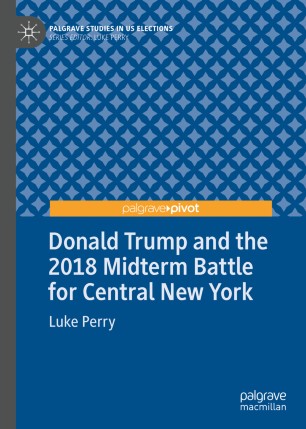 Donald Trump and the 2018 Midterm Battle for Central New York

Luke Perry’s inaugural Pivot in the Palgrave Studies in US Elections series examines the impact of Donald Trump on the 2018 midterm campaigns in Central New York, particularly competitive campaigns for NY-19, NY-22, and NY-24. Providing a contextual foundation for these races—considering factors such as incumbency advantage, history of party control of the seat, registered party members, statewide electoral norms, fundraising, and polling—Donald Trump and the 2018 Midterm Battle for Central New Yorkthen analyzes the positions and rhetoric of these GOP reelection campaigns, paying particular attention to the continuity and variance in relation to Trump’s personal, populist, and negative campaign style. When examined alongside the results of the midterm election, the outcomes illustrated how the president hurt more than helped House GOP incumbents, revealed the quality of candidates, proved how campaigns and grassroots organizing matter, and demonstrated that moderate Democrats were more successful than progressive ones.