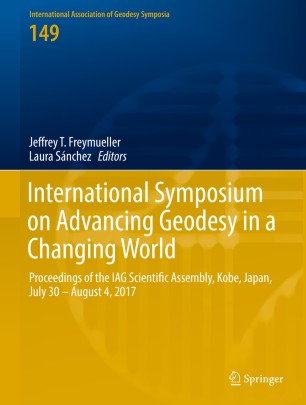 International Symposium on Advancing Geodesy in a Changing World

These proceedings contain 23 papers, which are the peer-reviewed versions of presentations made at the Joint Scientific Assembly of the International Association of Geodesy (IAG) and the International Association of Seismology and Physics of the Earth’s Interior (IASPEI). The assembly was held from 30 July to 4 August 2017 in Kobe, Japan. The scientific assembly included seven symposia organized by IAG, and nine joint symposia, along with additional symposia organized by IASPEI.

The IAG symposia were structured according to the four IAG Commissions and the three GGOS Focus Areas, and included reference frames, static and time-variable gravity field, Earth rotation and geodynamics, multi-signal positioning, geodetic remote sensing, and GGOS. The joint symposia included monitoring of the cryosphere, studies of earthquakes, earthquake source processes, and other types of fault slip, geohazard warning systems, deformation of the lithosphere, and seafloor geodesy. Together, the IAG and joint symposia spanned a broad range of work in geodesy and its applications.