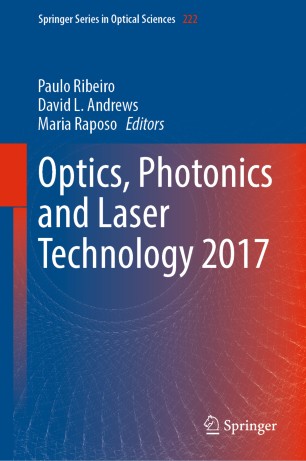 Paulo Ribeiro received the PhD degree in Materials Sciences and Engineering by Universidade de São Paulo, Brazil. He is Professor at Department of Physics of NOVA School of Science and Technology, New University of Lisbon, since 2000, where he has been dedicated to lecturing applied optics and photonics and organizing didactic sessions and expositions in the field of optical sciences. He is school ambassador since 2016, for the disclosure of the institution. He is founding member, of the Functional Molecular Systems research line at the Centre of Physics and Technological Research of NOVA School of Science and Technology, New University of Lisbon, created in 2008, where he is engaged in the development and characterization of molecular thin films of organic functional molecules for applications in optics photonics, sensors and devices. Since 2013 he has been chairing PHOTOPTICS international conference series on photonics, optics and laser technology. As a result of his research activities garnered about one hundred papers and communications in international journals and conferences, half of which published in international peer review journals.

David  L. Andrews leads nanophotonics and quantum electrodynamics research at UEA. The interests of his research group broadly concern developing the theory of molecular interactions - with each other, and with light - in terms of quantum electrodynamics (QED). Quantum electrodynamics is essentially the study of how matter interacts with light, treating both matter and light quantum mechanically. The QED group at UEA has been at the forefront in applications ranging from spectroscopy and nonlinear optics to the intermolecular transport of energy. Present research topics fall into four main areas: Molecular energy transfer and light harvesting; Nonlinear optics and photonics; Structured light and optical vortices; Laser-induced optical binding and inter-particle forces. The group enjoys strong international links, particularly with groups in Australia, Canada, Italy, Lithuania, New Zealand and the United States. Prof. Andrews has 380 research papers and also 20 books to his name, including a recent textbook on Photon Science and Technology, and as Editor-in-Chief a five-volume series entitled Comprehensive Nanoscience and Technology. He serves on the Editorial Boards of several international journals.

Maria Raposo received the PhD degree in Materials Sciences and Engineering by Universidade de São Paulo, Brazil in 1999 and, since 2000, is professor at Physics Department of Faculdade de Ciências e Tecnologia, Universidade Nova de Lisboa, lecturing Solid State Physics, Surface and Interfaces Technology, Conducting Polymers, Molecular Electronics and Physics of Functional Macromolecular Systems. Since 2008 is head of the Functional Molecular Systems group which research interests include the electric and optical properties of ultra-thin films of polymers and biomolecules, interfaces and nanotechnology, colloids, molecular architectures for electronics, photonics and magnetism, biomimetic membranes and radiation effect in biological systems. She has over  100 research papers and 1 book to her name. She  serves on Editorial Boards of internal journals and has been program chair of PHOTOPTICS, an international conference series on photonics,  optics and laser technology.