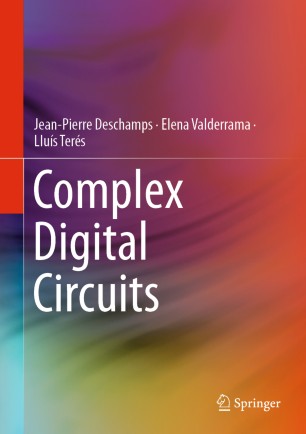 This textbook is designed for a second course on digital systems, focused on the design of digital circuits.  It was originally designed to accompany a MOOC (Massive Open Online Course) created at the Autonomous University of Barcelona (UAB), currently available on the Coursera platform.  Readers will learn to develop complex digital circuits, starting from a functional specification, will know the design alternatives that a development engineer can choose to reach the specified circuit performance, and will understand which design tools are available to develop a new circuit.

Jean-Pierre Deschamps received his MS degree in electrical engineering from the University of Louvain, Belgium, in 1967, his PhD in computer science from the Autonomous University of Barcelona, Spain, in 1983, and his second PhD degree in electrical engineering from the Polytechnic School of Lausanne, Switzerland, in 1984. He has worked in several companies, among others Philips, and universities, in Belgium, Spain and Argentina. He is currently a professor at the University Rovira i Virgili, Tarragona, Spain. His research interests include ASIC and FPGA design, digital arithmetic and cryptography. He is the author of nine books and of more than a hundred international papers.

Elena Valderrama has a PhD in Physics Science and a Degree in Medicine from the Autonoma University of Barcelona (UAB), Spain. She is currently Professor at the Microelectronics department in the Engineering School of the UAB. From 1980 to 1998 she was an Adscript Researcher of the National Centre for Microelectronics, and institute of the Spanish Superior Board for Scientific Research (CSIC), where she leaded several projects in which the design and integration of highly complex digital systems (VLSI) was crucial. Her current interests focus primarily on Education, not only form the side of the professor but also on the management and quality control in Engineering related educational programs. Her research moves around the biomedical applications of Microelectronics. Lluis Terés received Engineering (1981) and PhD (1986) degrees in Computer Sciences from the Autonoma University of Barcelona (UAB). He is with the National Centre for Microelectronics (CSIC), Barcelona Institute, since its creation in 1985. He is head of Integrated Circuits & Systems (ICAS) group, with research activities ranging from hardware description languages, flexible platform based design, up-to low power analogue-digital-mixed CMOS circuits design, N/MEMS sensors interface and organic/printed/flexible electronics. He has been participated and managed a large number of industrial and research projects resulting on a number of papers, patents and spin-offs. He is also part time Assistant Prof. at the UAB.