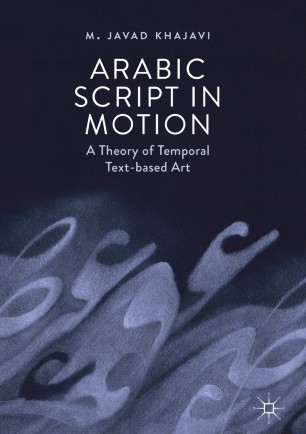 A Theory of Temporal Text-based Art

This book is a pioneering study of temporal typography and time-based calligraphic art written in the Arabic system of writing. Inspired by the innate qualities of Arabic script as well as certain practices in Islamic calligraphy and contemporary calligraphic art, the book devises five broad categories of temporal behaviors for Arabic characters in time-based media. It goes onto expand the vocabulary used to describe Arabic script’s appearance in time-based media and proposes a theory to help artists, practitioners, and theoreticians push the boundaries of temporal text-based art. Furthermore, it tackles questions of legibility and readability, and seeks to understand how temporality of Arabic text influences the creation of meaning. This book will therefore appeal not only to animators, designers, and artists, but also to commentators and scholars who deal with temporal text-based art written in Arabic script.

M Javad Khajavi is Associate Professor in the Institute of Film and Animation at Volda University College, Norway. The underlying focus of his research is to investigate issues of representation and perception in animation based media.