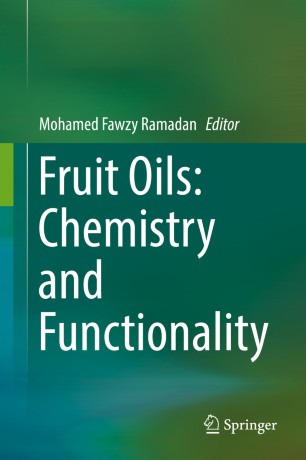 Fruit Oils: Chemistry and Functionality presents a comprehensive overview of recent advances in the chemistry and functionality of lipid bioactive phytochemicals found in fruit oils. The chapters in this text examine the composition, physicochemical characteristics and organoleptic attributes of each of the major fruit oils. The nutritional quality, oxidative stability, and potential food and non-food applications of these oils are also extensively covered. The potential health benefits of the bioactive lipids found in these fruit oils are also a focus of this text. For each oil presented, the levels of omega-9, omega-6 and omega-3 fatty acids are specified, indicating the level of health-promoting traits exhibited in each.

Mohamed Fawzy Ramadan is a Professor in the Agricultural Biochemistry Department, Faculty of Agriculture at Zagazig University in Zagazig, Egypt​​​. Prof. Ramadan obtained his Ph.D. (Dr.rer.nat.) in Food Chemistry from Berlin University of Technology (Germany, 2004). Prof. Ramadan continued his post-doctoral research in ranked universities in different countries such University of Helsinki (Finland), Max-Rubner Institute (Germany), Berlin University of Technology (Germany), and University of Maryland (USA). In 2010, he was appointed to be Visiting Professor (100% research) at King Saud University in Saudi Arabia. In 2012, he was appointed to be visiting Professor (100% teaching) in School of Biomedicine, Far Eastern Federal University in Vladivostok, Russian Federation. Since 2013, he is a research consultant and Professor of Biochemistry in the Deanship of Scientific Research at Umm Al-Qura University in Saudi Arabia.

Prof. Ramadan published more than 180 research papers, and reviews in international peer-reviewed journals as well as several books and book chapters (Scopus h-index is 32 and more than 3000 citations). He was an invited speaker at several international conferences. Since 2003, Prof. Ramadan is a reviewer and editor in several highly-cited international journals such as Journal of Medicinal Food.