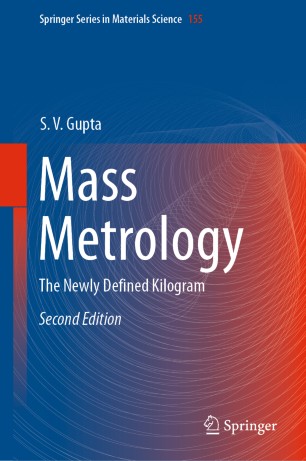 This second edition of Mass Metrology: The Newly Defined Kilogram has been thoroughly revised to reflect the recent redefinition of the kilogram in terms of Planck’s constant. The necessity of defining the kilogram in terms of physical constants was already underscored in the first edition. However, the kilogram can also be defined in terms of Avogadro’s number, using a collection of ions of heavy elements, by the levitation method, or using voltage and watt balances. The book also addresses the concepts of gravitational, inertial and conventional mass, and describes in detail the variation of acceleration due to gravity.

Further topics covered in this second edition include: the effect of gravity variations on the reading of electronic balances derived with respect to latitude, altitude and earth topography; the classification of weights by the OIML; and maximum permissible error in different categories of weights prescribed by national and international organizations. The book also discusses group weighing techniques and the use of nanotechnology for the detection of mass differences as small as 10-24 g. Last but not least, readers will find details on the XRCD method for defining the kilogram in terms of Planck’s constant.

Dr. S.V. Gupta holds Master’s degrees in Physics from Allahabad University and in Mathematics from Agra University. He obtained his Ph.D. in the area of diffrimoscopic imaging at Delhi University. Dr. Gupta subsequently completed advanced training at the International Bureau of Weights and Measures, BIPM, France; International Organisation of Legal Metrology, OIML, Paris France; National Physical Laboratory, UK; and PTB (Physikalisch-Technische Bundesanstalt), Germany. He has been involved in various projects with the National Institute for Standards and Technology, NIST, USA and with the PTB, Germany. Dr. Gupta was recently awarded the title of “Mapiki Ratan” (a Jewel in Metrology). Further international awards include Membership in The Institute of Physics, UK, and the Honours and Awards List of the OIML since 2004.