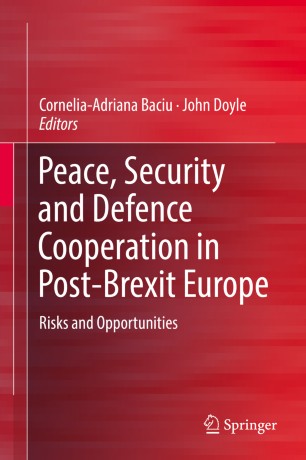 Highlighting the challenges and prospects of European security cooperation, this volume examines the impact of Brexit on strategic aspects of security, peace, defence and foreign policy for both the European Union and the UK. It applies theoretical and methodological approaches from international relations and security studies to analyse the causal mechanisms of security cooperation, and covers topics including innovative security technologies, defence procurement, EU-NATO relations, new capabilities frameworks (such as PESCO, EDF and EII), the role of French-German military cooperation, and the implications of Brexit for European deterrence or the Northern Ireland peace process. The findings contribute to a better understanding and management of anticipated challenges and sources of instability in post-Brexit Europe.

Cornelia-Adriana Baciu is a final year PhD candidate in International Security at the School of Law and Government, Dublin City University and a Government of Ireland Postgraduate Fellow. Her research focuses on European security, foreign policy and strategy, civil-military relations, regime complexity and research methods. She was a pre-doctoral fellow of the ZEIT Foundation Hamburg and worked as a security risk analyst at a crisis management enterprise in Konstanz, Germany. She studied Politics and European Studies in Germany, India and Romania and was awarded the VEUK Prize for her MA degree at the University of Konstanz, Germany. In 2018, she founded the transnational Research Network European Security and Strategy.

Professor John Doyle is Dean of the Faculty of Humanities and Social Sciences at Dublin City University and the founding Director of the Institute for International Conflict Resolution and Reconstruction (IICRR) in Ireland. He has been the lead PI on two Marie Curie European Training Networks on the post-Soviet region (TENSIONS AND CASPIAN) and has taken part in several studies of comparative peace processes, including two EU funded projects. His work on conflict resolution and the future of peace has been published among other places in the Journal of Common Market Studies, Ethnopolitics and International Peacekeeping.