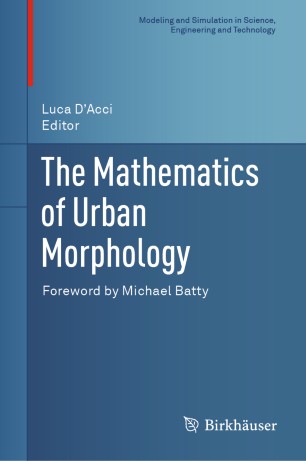 The Mathematics of Urban Morphology

This edited volume provides an essential resource for urban morphology, the study of urban forms and structures, offering a much-needed mathematical perspective. Experts on a variety of mathematical modeling techniques provide new insights into specific aspects of the field, such as street networks, sustainability, and urban growth. The chapters collected here make a clear case for the importance of tools and methods to understand, model, and simulate the formation and evolution of cities.
The chapters cover a wide variety of topics in urban morphology, and are conveniently organized by their mathematical principles. The first part covers fractals and focuses on how self-similar structures sort themselves out through competition. This is followed by a section on cellular automata, and includes chapters exploring how they generate fractal forms. Networks are the focus of the third part, which includes street networks and other forms as well. Chapters that examine complexity and its relation to urban structures are in part four.The fifth part introduces a variety of other quantitative models that can be used to study urban morphology. In the book’s final section, a series of multidisciplinary commentaries offers readers new ways of looking at the relationship between mathematics and urban forms.
Being the first book on this topic, Mathematics of Urban Morphology will be an invaluable resource for applied mathematicians and anyone studying urban morphology. Additionally, anyone who is interested in cities from the angle of economics, sociology, architecture, or geography will also find it useful.
"This book provides a useful perspective on the state of the art with respect to urban morphology in general and mathematics as tools and frames to disentangle the ideas that pervade arguments about form and function in particular. There is much to absorb in the pages that follow and there are many pointers to ways in which these ideas can be linked to related theories of cities, urban design and urban policy analysis as well as new movements such as the role of computation in cities and the idea of the smart city. Much food for thought. Read on, digest, enjoy."  From the foreword by Michael Batty

“D’Acci has with this book provided a useful overview of the mathematical models used in relation to urban morphology. … the book also fills an apparent gap in the literature, coupling urban morphology and mathematics. It is to be hoped that this can be the start of a long series of books and papers where this ‘new’ direction in urban morphology can flourish and provide knowledge about how cities can be developed in more sustainable trajectories.” (Meta Berghauser Pont, Urban Morphology, Vol. 23 (2), 2019)
“This monograph gives a comprehensive and contemporary overview of many recent advances on random walks over comb-like structures. … This monograph is written in an explanatory and concise manner with plenty of concrete examples rather than a formal definition-theorem-proof textbook form. Nevertheless, necessary elements and preliminaries are presented to the reader and the results covered here reflect the state-of-the-art of the research on comb structures.” (Yilun Shang, zbMATH 1410.91008, 2019)
Buy options