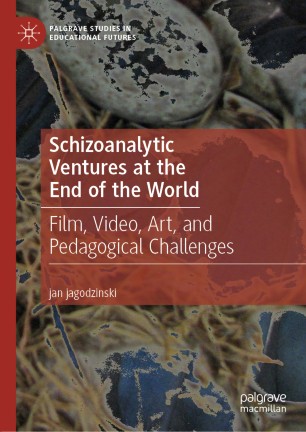 Schizoanalytic Ventures at the End of the World

This book provides a thorough application of theoretical ideas from Deleuze and Guattari to a series of examples drawn from contemporary film and new media arts. Chapters demonstrate examples of how to do schizoanalysis in philosophically informed cinema studies, new media, and arts based education. Schizoanalysis, as proposed by Deleuze and Guattari in distinction to Lacanian psychoanalysis, provides an imaginary basis to address the precarity of the contemporary world order: from the growing populism with its authoritarian fascist tendencies to the growing concerns regarding climate change within the Anthropocene. Part I of this book initiates this understanding through cinematic examples. Part II calls for a schizoanalytic pedagogical imagination, which is needed to provide insight into the structures of desire as they circulate in media, especially videogames, and the tensions between analogue and digital technological manifestations. Such pedagogy enables an understanding of the ‘new materialism’ where nonhuman and inhuman (AI) agencies are taken into account. To this end schizoanalytic pedagogy calls for a ‘new earth’ of transformed values and relationships.

jan jagodzinski is Professor of Art and Media Education in the Department of Secondary Education, University of Alberta, Canada. He is the author of fifteen books.

“The re-discovery of Dunhuang’s connection with education provides invaluable implications for contemporary schooling, such as aesthetic, moral, religious, STEM, multi-cultural, and lifelong aspects, as individually illustrated by this new book. It is particularly revealing nowadays when education suffers from the dominance of economic, political, or technocratic discourses in almost every system around the globe. The timely volume enlightens readers with a powerful, alternative lens that no educational leaders, educators, parents, and researchers can afford to miss! ((Jun Li, Xueliang Sun Professor, University of West Ontatrio, Canada)

“David Greig’s Holed Theatre: Globalization, Ethics and the Spectator is a creative and theoretically nuanced study of Greig’s drama from Europe to The Events. Identifying Greig as a “shamanic semionaut”, Rodríguez weaves an intricate and compelling analysis of the porous, relational nature of his theatre that meshes its aesthetic, ethical and political dimensions. An illuminating book guided by a passion for its subject and opening fresh perspectives on Greig’s multifaceted work.” (Clare Wallace, Charles University, Czech Republic)

“This is an important book that offers new ways of thinking and new vocabularies for approaching Greig’s rich and often puzzling body of work. Rodríguez methodically and meticulously investigates how Greig’s “holed theatre” momentarily and through contradictions might critique but also offer hope on the state of our world.” (Marilena Zaroulia, University of Winchester, UK)

“This book offers a reading of Greig’s work that has been indicated in previous accounts, but which has, up to this point, not received the detailed study it deserves. The theoretical framework is clearly delineated, the individual chapters rest on very careful readings of specific texts and performances, and Rodríguez is commendably clear on the links between the texts and performances, the theoretical framework she has established, and the wider world in which Greig’s work operates. This is an important contribution to the study of Greig’s work.” (David Pattie, Senior Lecturer in the Department of Drama and Theatre Arts, University of Birmingham, UK)

“Written in a clear and honest style, jan jagodzinski offers an urgent analysis of contemporary film and video games in light of the rising socio-political (micro)fascisms. His case studies are theoretically informed and deeply insightful, relating Deleuze and Guattari’s schizoanalysis to a wide range of existing scholarship (including psychoanalysis) and to contemporary debates on new materialism. An essential read for anyone interested in new approaches to pedagogy and a socio-political understanding of contemporary media culture ‘facing the Antropocene.’” (Patricia Pisters, Professor of Media and Film Studies, University of Amsterdam, Netherlands)

“If, as Deleuze and Guattari argue, the future acts on the present, then it is both timely and necessary for us to begin to think about the end of the world as jan jagodzinski asks us to do in his exciting and exacting new book. For there can be no doubt ours is an age of crisis, an age that demands action, and an age of paralysis, of political desires stuck in the quagmire of ‘where should we start?’ This book shows that the answer to the question ‘where should we start?’ is to be found everywhere in the creative works of our age and that the answer is simple: we need to start everywhere at once. Schizoanalytic Ventures At the End of the World finds hope where others might see desolation and despair and in that sense it is the perfect tonic for these desperate times. (Ian Buchanan, Professor of Cultural Studies, University of Wollongong, Australia)