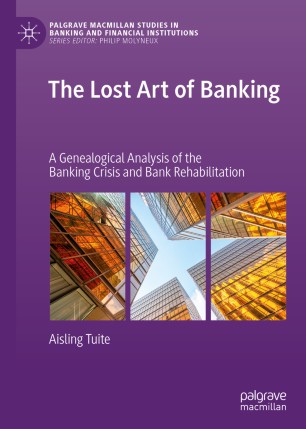 The Lost Art of Banking

A Genealogical Analysis of the Banking Crisis and Bank Rehabilitation

This Palgrave Pivot explores the recent financial crisis from a new perspective. Reflecting on 40 years of banking experiences, the book will open new avenues to understanding banking and comment on possible ways to rehabilitate banking organisations.

In 1965 the Bank of Ireland received a consultancy report from McKinsey & Company, which heralded a new phase in banking practice and organisation. In the years that followed, the Bank of Ireland opened up its once traditional culture to outside influences changing the way work was done and workers were viewed. Direct competition was introduced alongside specialisation of roles, and hence college education was identified as the way to meet demands of the market and bankers began to develop a full suite of products to keep customers loyal. The once professional bank manager who was a guardian of good practice eventually became absorbed into the needs of the leviathan organisation. The end result is an unimaginable and interlinked financial crisis in 2008 that swept across Ireland and the globe.

This book explores banking organisation and practice as it transforms and across the period from 1960 to 2018. It argues that organisational goals over individual responsibility paved the pathway towards crisis. Organisationally, anxiety and fear of failure took the place of certainty and stability. While the financial crisis is coming to an end, banking organisations remains fragile and prone to influences that may lead them towards a path of continuous cycles of boom and bust. Such a state has the potential to create an unending cycle of boom and bust and the end of stability and the institution of banking. This book shines a light on that and will be of interest to banking and finance researchers, students, and practitioners.

Aisling Tuite graduated from Waterford Institute of Technology (WIT), Ireland, with a MSc in Business, Innovation, Technology and Entrepreneurship and a PhD from the AIB Centre for Finance and Business Research, exploring the lives of workers in the Bank of Ireland between 1960 and 2000 through the vehicle of storytelling. As an interdisciplinary researcher, she is interested in the practical, historical, and transformational elements of work and careers, social interactions within organisations, and organisational change. She has been conducting research with the Waterford Unemployment and Employment Research Collaborative (WUERC) in WIT since 2012.