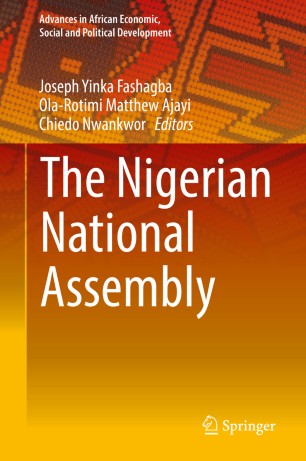 This book examines the role of the legislature in the democratic governance of Nigeria. Once one of the foremost political institutions of governance established in the early days of Colonial administration in Nigeria, the legislature has had an inconsistent role since statehood, subject to repeat dissolution at the hands of various military regimes.  Focusing on the Nigerian Fourth Republic’s National Assembly (1999-present), this book discusses in detail the ways in which the national assembly has handled each of its major functions, the nature of the relationship between the assembly and the legislature, and the institutional mechanism through which its internal business is facilitated and executed. Furthermore, the chapters examine the level of assertiveness of the legislature, and the degree of importance and weight attached to their contributions to governance in motions, resolutions, and law-making. This book offers a unique look into legislative studies, an area which has been historically overlooked in the research on the Nigerian government, and will be useful to students and researchers in African studies, democracy and state-building and legislative studies.

Dr Joseph Yinka Fashagba teaches politics and is the Head of Department of Political Science, Federal University Lokoja, Lokoja, Kogi State, Nigeria. He was Head of Department of Political Science and International Relations, Landmark University, Nigeria from 2012 to 2015. He is a specialist in Legislative Studies, African Politics and Democratic institutions. His papers have appeared in many local and international outlets. His papers- ‘Legislative Oversight under the Nigeria’s Presidential System’ and ‘Party Switching in Nigeria’s Fourth Republic’ appeared in 2009 and 2014, respectively, in ‘The Journal of Legislative Studies’. He recently co-edited a book titled ‘Africa State Governance: Subnational Politics and National Power’ with Professors Carl LeVan of American University, Washington DC and Edward McMahon of Vermont University, Burlington. The book was published in 2015 by Palgrave MacMillan in UK. He had previously co-edited two books with Prof Rotimi Ajayi of the Department of Political Science, Federal University Lokoja, Lokoja, Kogi State, Nigeria. Fashagba, in collaboration with LeVan, won a research grant from the National Endowment for Democracy in 2013 to carry out a study on some subnational legislatures in Africa. In 2014, the American Political Science Association also generously awarded Fashagba and LeVan a generous grant for manuscript writing and editing. He is the Convener of Round Table on Governance, Federal University Lokoja, Nigeria.

Dr. Chiedo Nwankwor is a Lecturer and Research Associate with the African Studies Program at the Johns Hopkins School of Advanced International Studies, Washington D.C., United States. Her research is mainly in the areas of comparative politic of African states, women’s political participation in Africa, and women and gender studies. Dr. Nwankwor has published in various outlets and teaches graduate courses in Contemporary African Politics, Gender in Africa, and Politics of Ethnicity and Identity in Africa.