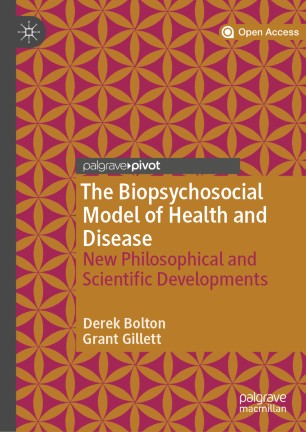 The Biopsychosocial Model of Health and Disease

‘This is an incredibly audacious book. Derek Bolton and Grant Gillett brilliantly succeed in providing the big picture that was lacking in the defense of the biopsychosocial model promoted by Engel 40 years ago.’
- Steeves Demazeux, Assistant Professor in philosophy, Bordeaux-Montaigne University, France
This open access book is a systematic update of the philosophical and scientific foundations of the biopsychosocial model of health, disease and healthcare. First proposed by George Engel 40 years ago, the Biopsychosocial Model is much cited in healthcare settings worldwide, but has been increasingly criticised for being vague, lacking in content, and in need of reworking in the light of recent developments. The book confronts the rapid changes to psychological science, neuroscience, healthcare, and philosophy that have occurred since the model was first proposed and addresses key issues such as the model’s scientific basis, clinical utility, and philosophical coherence.
The authors conceptualise biology and the psychosocial as in the same ontological space, interlinked by systems of communication-based regulatory control which constitute a new kind of causation. These are distinguished from physical and chemical laws, most clearly because they can break down, thus providing the basis for difference between health and disease. This work offers an urgent update to the model’s scientific and philosophical foundations, providing a new and coherent account of causal interactions between the biological, the psychological and social.
Derek Bolton is Professor of Philosophy and Psychopathology at the Institute of Psychiatry, Psychology and Neuroscience at King’s College London, UK. He was awarded a double first in Moral Sciences and a PhD in Philosophy at the University of Cambridge. His subsequent professional career was in clinical psychology and he has published extensively in philosophy of psychiatry as well as basic and clinical health science.
Grant Gillett is Professor of Bioethics at the University of Otago, New Zealand. His professional career was in Neurosurgery, punctuated by a D. Phil. at Oxford University in philosophy of mind and meta-ethics. He has published extensively in neuroethics, philosophy of mind and language, philosophy of medicine (particularly psychiatry), and the philosophy of medical and social sciences.