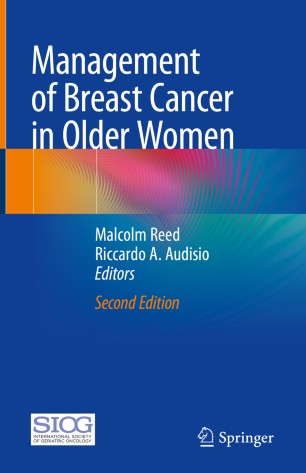 The second, updated edition of Management of Breast Cancer in Older Women offers the reader evidence-based knowledge to support the care of older patients with breast cancer. It presents the most up-to-date research and clinical practice from  leading specialists across a range of fields that come into contact with older breast cancer patients.

With new chapters on nursing and clinical trials in older women, as well as patient perspectives and the issues of managing patients with cognitive impairment, the book offers a new focus on this increasingly common and important group of patients. Multidisciplinary in its approach, this book covers all the bases for managing breast cancer in older women. The full range of therapeutic options is presented, as well as the epidemiology and specific psychosocial considerations for older patients.

Medical, surgical and radiation oncologists, breast nurses, gerontologists and all healthcare professionals involved in the management of older breast cancer patients will benefit from this unique and important work.

Riccardo A. Audisio was born in Milan, Italy, where he completed his High School at the Istituto Leone XIII (Maturità Scientifica) in 1975. He graduated in Padua in Medicine & Surgery (1980) and specialised in General Surgery at the University of Verona (1985) as well as in Diagnostic Radiology at the University of Milan (1994).

Trained at the National Cancer Institute of Milan (1980-94) he was appointed deputy director at the Department of General Surgery, European Institute of Oncology, Milan (1994-8).

He moved to the United Kingdom in 1999 to become Consultant Surgical Oncologist and Honorary Professor at the University of Liverpool, UK.

Past Editor of Surgical Oncology, Elsevier Publisher (2007-13) he is Editor-in-Chief of the European Journal of Surgical Oncology. Author of 240 peer-reviewed publications and 36 book chapters, Professor Audisio edited 20 book projects and is guest reviewer to 39 international scientific journals.

Professor Audisio is past-president of BASO (British Association of Surgical Oncologists) and of ESSO (European Society of Surgical Oncology). He is serving as an advisor to the Department of Health and to the All Party Parliamentary Group on Breast Cancer in Older Women. Professor Audisio sits on the Board of Directors of ECCO, the European CanCer Organisation. He is member of several international scientific societies including BASO, ESSO, SSO, ASGBI, ASCRS, AAA, SIOG and EUSOMA. He is past-chair of the Education & Training Committee of ESSO. His clinical research focuses on Breast Cancer and Geriatric Oncology. Past-President of SIOG (International Society of Geriatric Oncology) and past-chair the Surgical Task Force, Professor Audisio has organised several international advanced courses/meeting on cancer surgery, breast cancer and geriatric-oncology.

Malcolm Reed qualified in medicine from the University of Sheffield in 1981. Following postgraduate surgical training in the UK and a period of research at the University of Louisville in Kentucky, he returned to the UK for Higher Surgical Training.

He became Senior Lecturer and Honorary Consultant in 1992 and was appointed to the Foundation Chair in Surgical Oncology at the University of Sheffield in 1999.

In 2003 he became Head of Academic General Surgery and subsequently was appointed Head of the University's Department of Oncology. He was appointed as Dean of Brighton and Sussex Medical School in December 2014 and in 2016, Professor Reed became the Chair of the Medical Schools Council Education sub-committee.

He has a long-standing track record in cancer research, with more than 200 publications. His main current areas of clinical research relate to the surgical management of breast cancer, with particular emphasis on breast cancer in older women. His research also covers other important aspects of breast cancer diagnosis and treatment including projects evaluating the variation in the treatment of breast cancer. He is an active clinical trialist with several roles in major RCT’s as Chair or member of Trial Management and Data Monitoring Groups as well as Co-Investigator in a large UK Cohort Study (Bridging the Gap, Chief Investigator Professor Lynda Wyld).